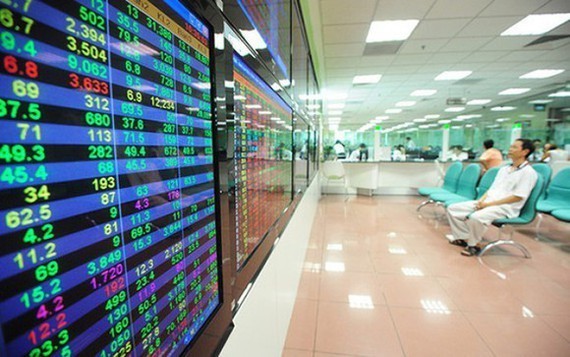 Illustrative photo
However, the stocks that fell short were of businesses not affected by the current war. Over the last three weeks, the stock market has remained positive in general, but this situation may last for only a short-term.

Stocks fall
The VN Index dropped approximately 53 points as soon as the Russia-Ukraine war broke out, in which the ten stocks that dropped the most points by approximately 38 points and equivalent to 72%, were of codes VHM, VCB, BID, MSN, VIC, CTG, GAS, TCB, BCM, and SAB, ranked from the highest to the lowest.
In this group, banking stocks accounted for a lot, and the price decline is believed to be partly due to the influence of increased payment risks with Russian banks, as many Russian banks have now been removed from the global Swift payment system. This concern is well-founded when the State Bank of Vietnam asked a number of domestic banks on 3 March to report on their cooperation with the Russian market, and problems in transactions as well as in two-way public debt. In fact, banking stocks had already reacted earlier with a very strong drop in just two or three days.
However, this fall in stock price may also have other reasons, because the decline in bank stocks did not begin until 24 February and after 3 March. Most banking stocks had a strong uptrend in the fourth quarter of 2021 and peaked at the end of January or at the beginning of February 2022. In other words, even without the Russia-Ukraine war or the imposed sanctions on the Russian banks, the bank stocks were still at risk of correction. The VCB stock code is the clearest example of this. This stock code caused the VN Index to drop the most among all the banking stocks, peaking on 25 January, and on 23 February just before the war broke out, the correction was 9.3%.
In addition to the first five mentioned banking stocks, the remaining five stocks that caused the VN Index to drop the most are all those codes that are having difficulty in finding a real connection with war conflicts or sanction related issues. For instance, MSN did not decrease when the conflict broke out and only dropped sharply in the last six sessions. VIC fell about 6.7% in the first three sessions since 24 February and for the last twelve sessions, it has only moved sideways. SAB and GAS are even less related names, with GAS only starting to drop sharply in the last week, when oil prices started to retreat.
Statistics of 409 stocks listed on HoSE since the start of the Russia-Ukraine war up until now, show that 193 stocks increased and 196 stocks decreased. It is easy to see that this is an equilibrium market state when for every one share that falls in price, there is still approximately one share that increases in price. From a probability perspective, it is clear that the market is still showing at random, and not a market that is reflecting the risk of war. The leading losers also had nothing to do with the conflict, such as VRC was down by 32.7%, which is the stock ticker of a real estate company in Vung Tau; or MCP which was down by 15.5%, and it belongs to a packaging company.
On the contrary, the conflict is showing an opportunity for stronger cash flow into beneficial stocks. Among the 193 stocks that have increased in price since 24 February, the liquidity focused most strongly on stocks that benefited from rising commodity prices and market expansion opportunities when mutual sanctions were launched. The five stocks with the largest average trading value are NKG, with an average of VND 573.1 bn per session during the conflict period; DPM with an average of VND 468.9 bn per session; HSG at an average of VND 448.4 bn per session; DCM at an average of VND 442.9 bn per session; and PVD at an average of VND 437.4 bn per session. It is not difficult to see that these are typical stocks of steel, fertilizer, oil and gas, which are all the fields where output prices are exploding at the moment.
Impending inflation
The above statistics show that the most interesting point of the stock market is the passive response. Any war can bring a lot of pain and destruction, but cash flow always finds benefits and opportunities in it. Currently the adjustment level in the stock markets is not too large, partly because so far, mutual punishment has not been in the most chaotic scenario that the market is worried about.
The most feared sector is oil and gas, where the Russian market share is huge. During the first ten days of the conflict, the price of Brent oil rose from US$ 96.8 per barrel to a peak of US$ 139.13 per barrel, equivalent to an increase of 43.7%. This reaction was due to fears that the oil and gas market will collapse if Russian oil supplies are cut off. However, when European sanctions left this commodity open, along with Russia's declaration not to weaponize oil and gas, then oil prices cooled down. Brent oil is now about the same price as it was before the conflict broke out.
However, the consequences of the war conflict will be much more persistently felt when the prices of many goods rise and anchor at very high levels, along with the disruption of the logistic chains across sea and air. Global investment institutions, as well as international organizations, warn of an inflationary pull in coming time with Central Banks left with no choice but to raise the interest rates.
In Vietnam, inflation is casting a shadow over an increasingly bright growth picture in 2022. According to Dragon Capital, Vietnam's biggest risk right now is an impending inflation. The consumer price index in two months increased by 1.7% over the same period last year due to a sharp increase in gasoline prices, accounting for 3.6% of the inflation. VinaCapital also believes that rising energy prices are the reason why it has lowered its forecast for Vietnam's GDP growth from 7.5% to 6.5% for 2022.