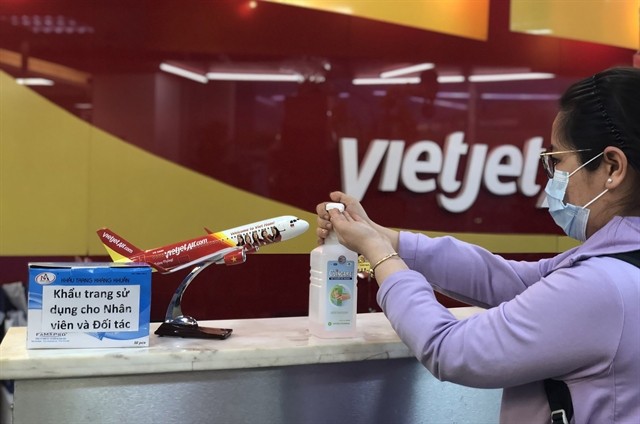 A client at the check-in counter of Vietjet Aviation Joint Stock Company (VJC). VJC rose 3.4 per cent on Wednesday. (Photo courtesy of Vietjet)
The benchmark VN-Index on the Ho Chi Minh Stock Exchange was up 0.83 per cent to close at 1,309.55 points.
The index had plunged 5.8 per cent over the last three sessions.
Nearly 522.9 million shares were traded on the southern bourse, worth VND16.8 trillion (US$737 million).
Market breadth was positive with 228 gaining stocks and 134 losers.
The VN30-Index rose 0.72 per cent to end at 1,428.51 points. Of the VN30 basket, 25 stocks rose while three slid and two stayed unchanged.
The index's gain was widened at the end of the session as a series of large-cap stocks jumped bolstered by investors’ bottom purchasing, including Masan Group (MSN) increasing by 5.1 per cent, Vietnam Airlines JSC (HVN) rising by 3.7 per cent, The Vietnam Rubber Group (GVR) up by 3.5 per cent, Vietjet (VJC) up by 3.4 per cent and Sabeco (SAB) up 3.4 per cent.
Securities stocks also rebounded and supported the overall market with notable gainers such as Viet Dragon Securities Co (VDS), Ho Chi Minh City Securities Corporation (HCM), Vietnam Bank For Industry and Trade Securities JSC (CTS), VIX Securities Joint Stock Company (VIX) and PetroVietnam Securities Incorporated (PSI).
“The struggling trend continued in today's session but turned green at the end of the session,” said BIDV Securities Co (BSC).
“Money flowed into the market with many sectors gaining compared to the previous sessions.
“Market breadth turned positive with market liquidity declining compared to the previous session. Meanwhile, foreign investors were net sellers on the HoSE and net buyers on the HNX.
“Although the market has prospered, the liquidity has weakened quite a lot compared to the previous sessions, showing that the uptrend is weak.
“BSC advises investors to trade cautiously and may open small positions in stocks that have corrected strongly in the recent correction,” it said.
Foreign investors net sold VND12.22 billion on HOSE. They were net buyers on HNX with a value of VND43.24 billion.
On the HanoiStock Exchange, the HNX-Index increased 1.27 per cent to end Wednesday at 336.01 points.
More than 100 million shares were traded on the northern market, worth VND2.2 trillion.