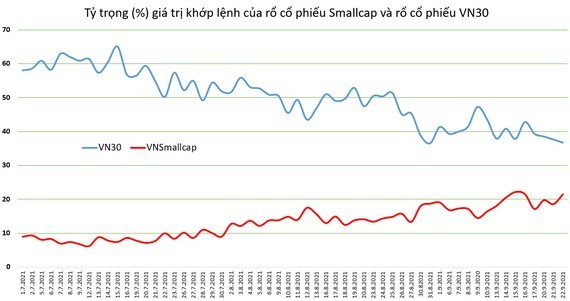 While investors have recently witnessed a wave of strong and very unpredictable price increases on a series of speculative stocks, in particular the smaller stocks. This looks like the result of smart money flow into the stock market that is now unstoppable.
Capital stagnation

Majority of ordinary investors are seeing speculative surfing as either a lucky or bad transaction on the stock market. However, the market always has different profit-seeking strategies, and investing or speculating are both for the same purpose, only in different ways. For the purpose of pure profit, a good trade is a profitable one, whether speculative or invested.

If viewed from the perspective of profit, the speculative activity is succeeding, even becoming a great success. Firstly, if compared from the overall perspective of indexes, the representative of the small cap group, including most of the frequently speculated codes of HoSE, is the VNSmallcap index. This index from the beginning of August 2021 until 22 September has increased by 29%. While the VN30's representative index of blue chips, including those that are mainly preferred for long term investment, increased by only 0.41%. Assuming an investment with this stock for nearly two months now, it is clear that holding the VNSmallcap index is much more profitable than holding the VN30 Index.

Secondly, if the probability is taken into account for obtaining a high profit, it is also much easier for smaller speculative stocks. In 193 stocks of the VNSmallcap group, from the beginning of August until 22 September, which was 36 trading sessions, the probability to hold 1 share and getting 10% profit upto 79.3%. In the same time frame, the probability to get a stock in the VN30 blue chip group with a profit of 10% is only 16.7%. It can be seen immediately that although the number of stocks in the VNSmallcap basket are 6.4 times higher than the VN30 basket, the chances of making a profit are still much easier.

It's clear to any investor that the past two months have been an exhausting time to hold blue chip stocks. Although not many stocks lose, the risk of capital accumulation is present. For long term investors, no profit or even loss for a few months is no big a deal. However, on the Vietnamese stock market, how many long term investors are there is to be seen.

This explains the phenomenon of capital flow shifting from blue chip to small cap stocks very clearly in the market. VN Index representing the market reached its historic peak on 2 July 2021, and corrected from there. VNSmallcap index representing small cap codes only adjusted together with VN Index until 19 July 2021, but has bottomed and started to increase continuously so far. From the beginning of July to 19 July, the daily trading proportion of the VN30 basket accounted for an average of 60% of the matching value on HoSE and the VNSmallcap basket of about 7.9%. However, during the rest of the period, this proportion gradually increased for VNSmallcap and gradually decreased for VN30 as can be seen in the chart above. Until the beginning of September, the transaction proportion of VNSmallcap exceeded 20%, while the proportion of VN30 dropped to about 36% to 40%.

The phenomenon of capital inflow to speculate on small stocks is creating a feeling that the market is deviant because the speculative mentality is so common. In fact, if the capital flow in the market is considered a relatively stable number, it is normal for this capital flow to move because the money is where the best profit is, and the group that receives the most money will have to spend less money. In Vietnam’s market, the industry group factor is not clear, so short term speculation is biased towards capitalization and free float ratio. The easier the stock is for control of liquidity, the easier it is to speculate.

History has shown many phases when the market operates as it is doing now, but that is an inevitable part. Blue chips are too volatile and cause capital accumulation, so only long term investors who like to hold and large investment funds can trade. In contrast, individual speculators who like to surf and want to make quick profits cannot let the capital flow die down like that. This is purely the timing of trading decision.

The important factor is the cash flow nature of each trading activity. It is not that professional investment funds do not see the opportunity to speculate or don't know how to speculate, or don't know how to price, but they suffer from poor return performance far from individual speculators. Different trading standards, regulations, different capital sizes have a huge influence on operations. Blue chips mostly have large cash flow from professional investors, so the ability to blow up prices is a struggle for many smart minds. In contrast, blowing small speculative stocks usually has a leader and a follower, as long as it can tell a compelling story for the majority to believe. The new blue chips are a manifestation of the large cash flow trail and the direction of the market, no matter how crazy small stocks can be.