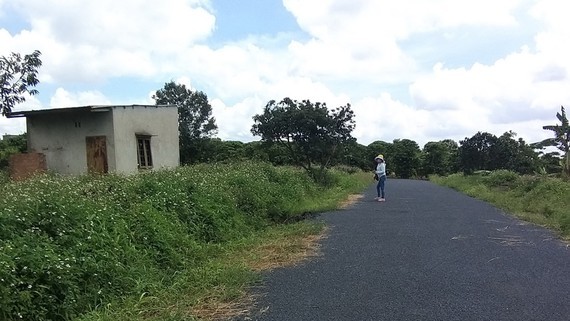 At the end of November 2021, the real estate market in Binh Chanh District in HCMC was bustling because many investors flocked there to hunt the land. Rumor has it that Binh Chanh will be upgraded into an urban district from a rural district or even to the city, making real estate there become the focus of investors.

According to a survey by Batdongsan.com.vn, in early 2021, in Binh Chanh District, the price of land with land use rights certificate was at VND30 million-VND35 million per square meter in Vinh Loc A and Vinh Loc B communes, VND40 million-VND45 million per square meter in Phong Phu Commune, and about VND65 million-VND80 million per square meter in Binh Hung Commune. However, it is recorded that the land price in these localities has now risen by 30 percent. Not only residential land, but agricultural one has also increased. About two months ago, 1,000 square meters of rice land in Binh Loi Commune was valued at VND1.2 billion, but now it has surged to VND1.8 billion. Nguyen Huu Loc, a real estate broker in Binh Chanh District, shared that most customers still prefer to buy agricultural land because the investment is small, but the land area is large. Once Binh Chanh District is upgraded, the opportunity to convert agricultural land into residential land will be great, which means they bought land at a good price.

In the Southeast region, Ba Ria - Vung Tau is the hottest locality among the land plot markets. Along the coastal areas of Vung Tau - Binh Chau, especially in Loc An Commune in Dat Do District, real estate brokers have flocked to put up signboards, distribute brochures, and advertise aggressively online. Calling a phone number on a signboard for land sale in An Hoi Hamlet, a woman named N. said that she was selling nearly 40 residential plots of land located right next to the coastal road for VND17 million per square meter. “The land price has been doubled compared to nearly a year ago. It has not been two years, but neighboring land plots have also tripled in the price," a land broker confided.
Vice-Chairman of the People's Committee of Ba Ria - Vung Tau Province Nguyen Cong Vinh asked People's Committees of districts, towns, and cities to strengthen land and construction management, prevent virtual land fever in the area, and control the risk of real estate bubbles. Ba Ria - Vung Tau Province also requires units to strengthen market inspection to have appropriate solutions to prevent rumors from spreading and investment following crowd psychology, causing instability and a bad influence on security and order and people's lives, and at the same time, strictly punish violators.
In Binh Thuan Province, after the land fever in the area near the Phan Thiet Airport project shows signs of cooling down, recently, investors from Ho Chi Minh City and Dong Nai Province suddenly flocked to the surrounding areas of Phan Thiet City, such as Ham Liem, Ham Chinh, Ham Hiep communes in Ham Thuan Bac District, and Ham My Commune in Ham Thuan Nam District, to hunt the land. T.V.M., a land broker, said that many investors rushed to Binh Thuan to buy land to catch the wave of the ongoing North-South Expressway project. Others gather land in coastal areas to build farmhouses and resorts. According to the survey, the price of land plots located deep inside the alleys in the above areas was only about VND300 million-VND350 million per 1,000 square meters, but now it has surged to VND450 million-VND600 million. Particularly, in hamlets 1 and 3 of Ham Liem Commune, the land price in concrete alleys was only VND400 million-VND500 million per 1,000 square meters, now it has climbed to VND1.2 billion-VND1.4 billion.


Land prices in the suburbs of cities, such as Da Lat, Bao Loc, or the districts of Bao Lam, Lam Ha, and Da Huoai in Lam Dong Province, have also rebounded after these localities removed travel restrictions. Along the provincial road 725 in Ta Nung Commune in Da Lat City, many land plots are put up for sale. "The land price for about 1,000 square meters is VND1.5 billion without the land-use rights certificate. If there is a land-use rights certificate, it is much higher," said a resident. Previously, this area was for growing fruit trees only. However, because some investors opened some homestays nearby, the land price has increased in tandem. In Bao Lam District, many land parcels are divided into smaller plots of 500-700 square meters, with electricity, road connection, and a house in B'La Commune, which are put up for sale at VND1.7 billion-VND2 billion. “It is extremely difficult to find land for subdivision now because Lam Dong Province has tightened the parcel separation. Previously, land price was only a few hundred million Vietnamese dongs, but now it is billions of Vietnamese dong,” a land broker explained.

According to real estate market research companies, the impact of the Covid-19 pandemic caused a significant drop in new supply and purchasing power but created a paradox in the market: virtual land fever comes from baseless information.

Real estate experts said that the virtual land fever was mainly caused by groups of investors and brokers, with the trick of gathering land and overcharging for a profit. According to real estate expert Phan Cong Chanh, the real estate market in early 2022 is distinctive because it is a sensitive time of the economy, which is on recovery after being heavily affected by the Covid-19 pandemic. At this time, the manifestations of the real estate market are a matter of speculation instead of investment because many people are worried about inflation and devaluation of the currency, so they have to seek somewhere to make the cash flow more lucrative. Faced with this situation, real estate prices will possibly be pushed up. However, speculative cash flow is not sustainable, so investors must be careful with their cash flow because the land is not always profitable.

According to Mr. Nguyen Duc Lap, Director of the Real Estate Training and Research Institute, the current land fever is mainly caused by speculators pushing up the price. Therefore, the responsibility is still of the authorities at all levels in easing land fevers, stabilizing the market, and quickly handling violations thoroughly. “The government needs to be transparent about planning projects and clearly inform which stage the planning is in, whether it is planning research or investment promotion, and who is the investor. The project implementation roadmap also needs to be publicized clearly. By doing that, people are fully informed and calm instead of being drawn into the real estate speculation storm," Mr. Nguyen Duc Lap suggested.