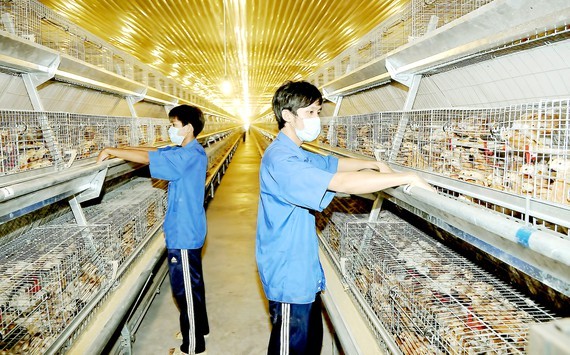 All kinds of animal feed for pigs, chickens, and ducks have risen by at least 25 percent since the beginning of the year. (Photo: SGGP)
On August 12, the Vietnam Poultry Association, CropLife Asia, and the US Department of Agriculture (USDA) joined hands to organize a webinar on solutions to help livestock production in Vietnam to develop more sustainably and add more stable sources of raw materials to reduce the dependence on imported animal feed.

It was recorded that in Dong Nai Province, the capital of livestock production in the Southeast region with a total herd of about 2.6 million cattle and about 26.4 million chickens, farmers are facing many difficulties.

Nguyen Xuan Vinh, the owner of a pig farm in Xuan Truong Commune of Xuan Loc District in Dong Nai Province, said that his pig farm has a scale of 200 porkers and consumes about 17 bags of miller’s bran every day. Currently, the price of miller’s bran escalates continuously, the cost of feed for his pigs surges by nearly VND200,000 every day.

Mr. Nguyen Kim Doan, Vice Chairman of Dong Nai Livestock Production Association, said that from November last year to now, the price of pig feed has climbed nine times, with an average increase of VND300-VND600 per kg. Therefore, when being sold, the cost price rises by VND1 million for each pig. Feed price advances while the price of live pigs drops, so, at present, farmers are losing money, and they do not dare to repopulate pig herds.

Nguyen Thanh Liem, a farmer in Tam Hiep Hamlet of Gia Ray Town in Xuan Loc District, said that his duck farm currently has more than 1,000 unsalable ducks, and he has to spend millions of Vietnamese dong or more on feed every day. In the past few days, he had to sell off ducks to local people.

In Tay Ninh Province, an animal feed agent in Chau Thanh Town said that all kinds of animal feed for pigs, chickens, and ducks have risen by at least 25 percent since the beginning of the year. For animal feed, such as Con Co, Cargill, GreenFeed, and Hi-gro, the price has rallied by up to 30 percent.

Similarly, farmers in the Mekong Delta are also being impoverished because of high feed prices.

Nguyen Van Tan, a pangasius farmer for export in Chau Phu District in An Giang Province, said that fish feed has increased four times from the beginning of the year and is currently fluctuating around VND12,000 per kg, depending on the type. The cost price of pangasius fish is about VND23,000 - VND25,000 per kg, but the selling price is only about VND21,500-VND22,500 per kg, making farmers suffer losses.

As one of many shrimp farming households that face difficulties, Mr. Tran Van Viet, Director of Thanh Cong Industrial Shrimp Farming Cooperative in Dam Doi District of Ca Mau Province, said that the current shrimp prices have fallen too low, so shrimp farmers suffer heavy losses. Currently, farmers definitely suffer losses with sized-50-pcs-per-kg shrimp or more, and they can break even or make a little profit with sized-30-50-pcs-per-kg shrimp. Although shrimp prices decline, the prices of shrimp feed continue to increase. Therefore, after harvesting, many farmers have suspended shrimp farming.

At the seminar, Ms. Tran Ngoc Yen, Director of Agromonitor Market Analysis Company, informed that after the African swine fever outbreak, the price of live porkers rocketed, farmers could make a profit of up to VND6 million per head. Now they can only have a profit of VND1.5 million-VND2 million per head. This profit comes with the condition that the pig farm owners have autonomy in the source of sows. However, if they have to buy piglets for breeding, they will suffer losses.

Mr. Nguyen Thanh Son, Chairman of the Vietnam Poultry Association, said that the current price of chickens and ducks is extremely low. Besides the impact of the Covid-19 pandemic, leading to difficult consumption, according to Mr. Son and Ms. Yen, farmers lose money and constantly face risks mainly because of the high global feed prices. For a long time, Vietnam has been too dependent on imported feed materials, so when there is a fluctuation in the global raw material prices, the domestic feed price will also increase in tandem.

In the long term, the Chairman of the Vietnam Poultry Association said that it is necessary to consider soon reducing dependence on the import market by actively producing and supplying raw materials for animal feed domestically. Because according to the forecast, the demand for feed materials in the coming time will continue to surge strongly as Vietnam will need about 28 million-30 million tons per year in the next five years. If the source of raw materials cannot be autonomous, farmers will continue to struggle when prices fluctuate.

Mr. Nguyen Thanh Son said that besides tax and trade policy solutions, Vietnam needs basic and methodical strategies to gain autonomy in domestic feed materials. Of these, the most feasible and effective solution is to develop biotech crops, such as corn and soybeans, to use as feed materials because of high productivity and output.

Ms. Dinh Thi Thuy Phuong, Deputy Director of Price Department under the General Statistics Office of Vietnam, suggested the application of many synchronous solutions to increase feed supply, such as taking advantage of by-products of domestic manufacturing and livestock production industries. Domestic feed producers also need to maximize the source of raw materials to gradually replace imported ones and reduce costs by taking advantage of local raw material sources.

According to the GSO, in 2020, Vietnam’s import value of animal feed and raw materials rose by 3.75 percent, but in the first six months of this year alone, this rate jumped by 36.6 percent over the same period last year.