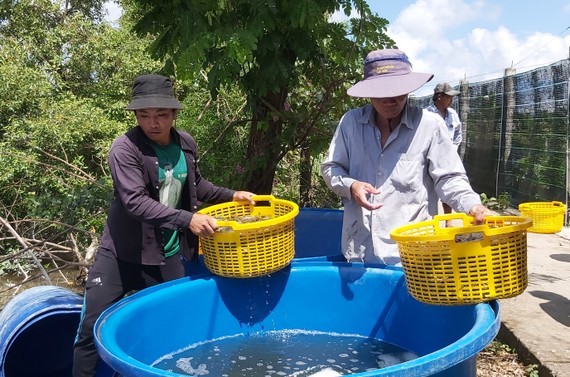 From the beginning of the year, shrimp price has tended to surge creating excitement for farmers in the region. Therefore, more high-tech shrimp farming models have been promoted and implemented bringing high economical values.
In Bac Lieu Province, there are around 134,800 hectares of land dedicated for aquaculture yielding an output of 123,075 tons, an increase of nine percent over the same period last year. Of which, shrimp output reached over 64,740 tons, a surge of over 11 percent over the same period in 2021.

Similarly, shrimp farming area and output in the coastal localities of the Mekong Delta have been expanded sharply. Specifically, the shrimp output of Ca Mau Province gained 118,245 tons in the first six months of the year, increasing ten percent over the same period last year.

Meanwhile, the shrimp output of Kien Giang Province reached 56,050 tons.
At the current time, the shrimp prices in the Mekong Delta are stable. Specifically, the big black tiger shrimp with 20 pieces per kilogram is priced at VND235,000 (US$10) per kilogram while the big white shrimp is being traded at around VND230,000 (US$9.9) per kilogram.