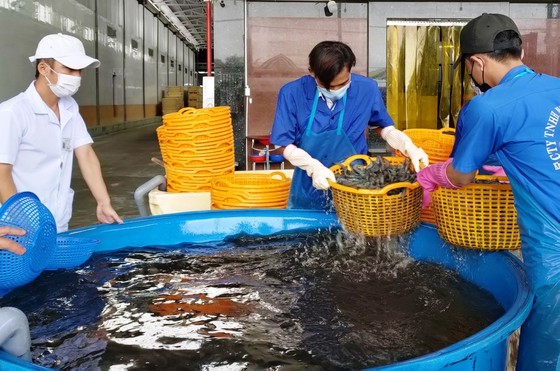 Raw shrimp prices have climbed again in the Mekong Delta. (Photo: SGGP)
In early December, raw shrimp prices in the Mekong Delta fluctuated at a high level. Specifically, black tiger shrimp-sized 40 pieces per kilogram was priced at VND150,000-VND160,000 per kg; white-leg shrimp sized 100 pcs per kg was sold at VND102,000 per kg, sized 50 pcs per kg at VND136,000 per kg, and sized 30 pcs per kg at VND168,000 per kg. The average price increased by VND20,000-VND30,000 per kg compared to that in August and September. Although shrimp prices are high, many shrimp farmers in the Mekong Delta have no more shrimp to sell. The impact of the Covid-19 pandemic had caused shrimp prices to fall sharply for a long time, along with the increasing cost of feed, causing farmers to suffer losses, so they had to suspend shrimp farming. Exporting enterprises also face a shortage of raw shrimp, so they encounter many difficulties in delivery.

According to the Department of Industry and Trade of Bac Lieu Province, the province's total export turnover in the first 11 months of this year exceeded US$707 million. Of which, frozen shrimp reached $688 million. It is forecasted that the shrimp export turnover of Bac Lieu Province by the end of the year will still post a growth compared to 2020.

Director of the Department of Industry and Trade of Bac Lieu Province Phan Van Sau said that shrimp processing was the bright spot of the province. Although the Covid-19 pandemic developed complicatedly and unpredictably, enterprises have made efforts to implement measures to prevent the pandemic and accelerate production. Therefore, they have achieved positive results. The output of processed shrimp in 2021 is estimated at 170,000 tons, equal to 111 percent of the plan, up 15 percent compared to 2020. The shrimp export turnover of Ca Mau Province is expected to reach $1.1 billion, equal to 100 percent of the plan, an increase of over 8 percent compared to 2020. According to the Department of Industry and Trade of Kien Giang Province, seafood exports have nearly touched $300 million, an increase of 9.04 percent compared to 2020. Soc Trang Province also achieved a seafood export turnover of $910 million, up 8.64 percent compared to 2020.

The last month of 2021 is the time for enterprises to speed up the delivery of orders to foreign partners as planned. Currently, Vietnam's frozen and steamed shrimp products have been exported to many markets globally, such as Japan, Australia, the US, and the EU. Besides, the advantages from free trade agreements that Vietnam has signed, along with an increase in export shrimp prices over the same period, will continue to create many advantages when exporting.


According to the Vietnam Association of Seafood Exporters and Producers, shrimp exports in November this year nearly hit $350 million, up about 11 percent. In the first 11 months of 2021, shrimp exports exceeded $3.5 billion, up nearly 3 percent year-on-year. At present, enterprises are striving to achieve the goal of $4 billion in 2021.