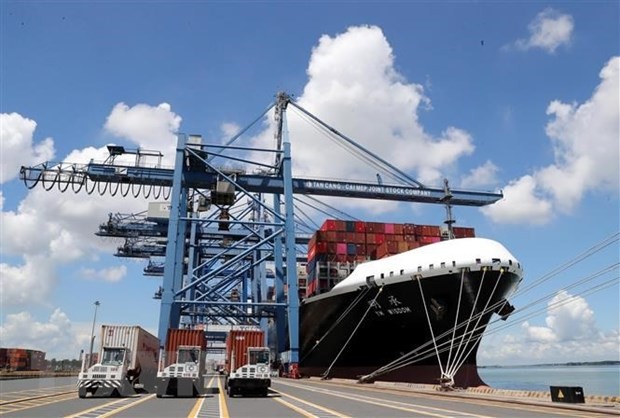 Containers loaded at Tan Cang - Cai Mep International Terminal. From mid-May, several container shipping lines announced increases in transportation fees. — VNA/VNS Photo
Six months on from when a lack of containers globally pushed up marine transportation fees, import and export companies were expecting that the fees would be reduced thanks to the vaccination campaigns which helped control COVID-19.
However, experts said it would be very difficult for the container shipping fees to come back to the pre-pandemic levels despite successfully containing the virus and no severe shortage of containers.
But from mid-May, several container shipping lines announced increases in transportation fees from US$400 to more than $1,000 per container.
Germany’s Hapag-Lloyd raised the general rate increase (GRI) for routes from East Asia (including Vietnam) to the US and Canada to $960 per 20 feet container and $1,200 per 40 feet container starting from May 15.
The US shipping line CMA CGM announced an increased freight rate from mid-May for routes from Somali to Northern Europe, the Mediterranean, Black Sea, India and Pakistan.
The Swiss shipping line MSC raised sipping surcharges to $800 per container from May 18.
Duong Thanh Lan, deputy director of Blue Sea Cargo Logistics Transport Corporation, said freight rates for the route to the US saw the biggest increases.
In April, the popular freight rates to the west coast of the US was around $5,000 per 40-foot container. However, the quotation is now more than $10,000.
Freight rates to Europe kept increasing steadily and were also at high levels.
The rates for routes from Vietnam to the Europe was now at around $7,000-8,000 and to the US at more than $10,000 compared to $1,500 and less than $1,000 in pre-pandemic times, respectively.
Thanh said that shipping lines said this was due to stockpiles at ports, enterprises wanted to speed up shipping, especially to the US, which pushed up transportation demand as well as freight rates.
Tran Van Linh , chairman of Thuan Phuoc Seafood and Trading Corporation said that marine transportation fees were not at unreasonably high levels but import-export companies like his had no choice but to accept the increases.
Halting import and export activities was impossible because of commitments to the partners, Linh said, adding that cancellation of orders or failure to deliver on time would undermine the company’s prestige and efforts in finding customers in the future.
Truong Tien Dung, director of Sai Gon Aquatic Products Trading Joint Stock Company, said that high marine transportation fees were weighing down import and export companies, with many small scale operations forced to close down or temporarily halt business.
Despite increases in transportation fees, it would be impossible to negotiate for increases in products prices because the COVID-19 pandemic made consumers in markets like the US and the EU tighten their budget and focus mainly on essential goods and products with reasonable prices, Dung said. High transportation fees were eating into companies’ profits, he stressed.