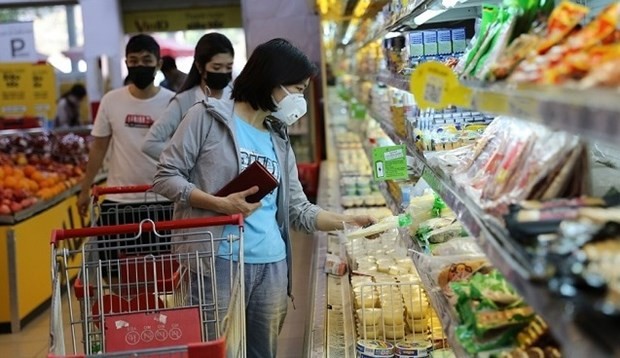 Vietnam’s real retail sales, excluding the impact of inflation, grew by 7.9 percent year-on-year in the first six months of 2022. (Photo: VNA)
Earnings growth are expected to exceed 20 percent this year, Kokalari said in a report entitled “The divergence between Vietnam’s strong economy & weak stock market,” which outlines expectation for Vietnam’s economy in the last five months of 2022. It is attributed to the country’s solid economic performance, he added.
Vietnam’s real retail sales, excluding the impact of inflation, grew by 7.9 percent year-on-year in the first six months of 2022. This figure surged to 11.9 percent in the seven months, which is far above the 7 percent year-on-year growth that VinaCapital had previously been forecasting for 2022.
“This is important because we are often asked now whether the ongoing slowdown in the US economy - which is Vietnam’s biggest export market - will weigh on Vietnam’s economic growth,” Kokalari said.
A slowing US economy is likely to temper Vietnam’s export and economic growth, however, the impact of that slowdown will be offset by the country’s strong domestic economy, he said.
The revenues and earnings of companies listed on Vietnam’s stock market are primarily driven by the domestic economy, which is why VinaCapital expects the stock market to benefit from the unexpectedly strong domestic growth.
According to Kokalari, Vietnam’s stock market rose 37 percent last year, driven by a 36 percent surge in earnings. The consensus expects 16 percent earnings growth in 2022 and earnings growth of over 20 percent this year, as expected by VinaCapital, supported by Vietnam’s strong economic growth. All of this makes it somewhat surprising that the VN-Index is currently down 17 percent compared to the beginning of 2022.
The US Federal Reversal (Fed)’s interest rate hike has dampened global stock market investors’ sentiment, but VinaCapital expects Vietnam’s strong domestic economy to offset weak stock market sentiment in the US and other markets. The main reason for the recent dour sentiment among Vietnamese retail investors is the Government’s crackdown on illegal practices by certain companies that started at the end of March.
"But we believe the Government’s efforts to improve corporate governance and transparency will ultimately benefit Vietnam’s stock market, and the country as a whole,' he noted.
The economist said that Vietnam’s stock market should be one of the biggest beneficiaries of a Fed pivot because the country has the most attractive valuation in the region, and the second highest expected earnings growth next to Indonesia, adding that he believes the quality of Vietnam’s corporate earnings is currently much better than that of Indonesia and other regional peers.