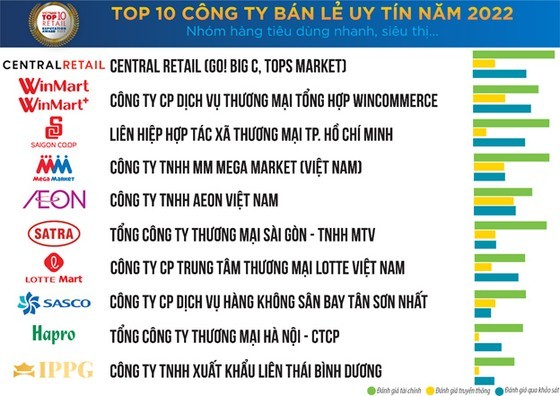 The list of the top ten retailers in the country
According to Vietnam Report, in contrast to the gloomy situation when a series of stores had to close to implement the mandate of social distancing a year ago, in-store shopping is ramping up again now that stores have begun to reopen. In the first nine months of 2022, the total retail sales of consumer goods and services reached more than VND4.1 million billion, up 21 percent over the same period last year.
The Vietnam Report's retail business survey conducted in August showed that 53.8 percent of retail businesses have now achieved business performance equal to and exceeding pre-pandemic levels.
According to Vietnam Report, 91.7 percent of business respondents said that the business outlook of the retail industry in the last months of 2022 will be better than the same period in previous years.
The proportion of enterprises being cautious about their own business prospects accounted for 15.8 percent. According to these enterprises, inflation and economic recession are becoming the biggest risks to the growth of the retail industry. Inflation increased and remained high in the first half of 2022, putting pressure on consumers' purchasing power while people’s average income has not kept pace with current inflation.
Vietnam Report's survey has shown that consumers have to cut spending on most non-essential goods. Worse, if inflation continues to increase, consumers will also cut spending on essential goods such as food, beverages, and fast-moving consumer goods - products that are sold quickly and at a relatively low cost.
According to Vietnam Report's forecast, there are three main trends in the retail industry including online sales on social media channels, personalized customer service, and Omnichannel retail - a strategy in which retailers engage customers through multiple digital and physical touchpoints. Also, Vietnam Report predicted that online sales on social media channels will explode while omnichannel retail will continue to flourish thanks to increasing consumers’ seamless shopping experience.
Regarding the strategy of retail businesses in the new context, according to experts taking part in the Vietnam Report’s survey, it is necessary to focus on strengthening internal resources while human resources in the retail business must be re-trained.