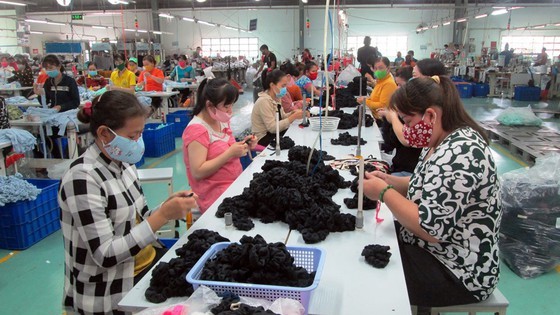 Long An Province strives to bring enterprises back to operations. (Photo: SGGP)
More than 2,500 employees of enterprises in the QTSC have returned to work. This number is modest in comparison with the total number of 12,000 regular workers working at the QTSC before the pandemic. The Board of Directors of the QTSC suggested that because the working environment there is different from factories and plants, it is necessary to have separate safety assessment criteria for the QTSC to stabilize production and prevent the pandemic.

All 85 SHTP-based enterprises, with about 25,000 workers (accounting for 50 percent), have also restored operations. Over the past time, enterprises in the SHTP have both fought against the pandemic and engaged in production, creating an export value of more than US$16 billion in the first nine months of this year, higher than the same period last year. According to Ms. Le Bich Loan, Deputy Head of the SHTP Management Board, the number of workers who have returned to their hometowns or are stuck in other localities is not much. About 20-30 percent of workers are ready to return to work when enterprises increase production capacity.

Enterprises in the SHTP are also freeing employees from the "three-on-site" production model to help them have time to rest and recover. They have asked the city to support a part of the funding to welcome workers from other provinces back to HCMC. The SHTP also proposed the People's Committee of HCMC to shorten the work permit procedures for foreign experts to enter the working area, take measures to release goods quickly, establish a separate lane for container trucks to enter and exit the SHTP, and speed up the circulation of export goods.

Director of Binh Duong Department of Industry and Trade Nguyen Thanh Toan, on October 6, informed that Binh Duong Province, together with the leaders of the Foreign Investment Agency under the Ministry of Planning and Investment, HCMC, and Dong Nai Province, had worked with Nike Group on the resumption of production.

According to the assessment, Binh Duong, HCMC, Dong Nai, and Nike Group have been working well to prepare for enterprises to immediately restart the production chains at factories in the Southeast region, especially in Binh Duong Province. The province currently has a production chain with 20 enterprises of Nike Group, gathering mainly in Bau Bang District, Thuan An City, and Tan Uyen Town. Mr. Nguyen Thanh Toan affirmed that Nike Group said it would continue to invest in and expand production in Binh Duong Province. At present, some workers, who returned to their hometowns, have returned to work in the state of "new normal".

On the same day, the Employment Service Center of Binh Duong Province said that some enterprises registered to recruit again with a total number of nearly 50,000 workers, with the average salary offered by businesses at VND10 million per month, not including allowances from VND500,000 to VND2.5 million per month. Specifically, Techtronic Industries Vietnam Company needs to recruit 3,000 workers for its three factories in VSIP2, Dai Dang, and My Phuoc 3 industrial parks; Loi Hao Manufacturing and Trading Company wants to recruit 550 workers.

* On the same day, the People's Committee of Long An Province said that the province aimed to have about 40 percent of the total of more than 13,483 enterprises with about 370,000 workers operated again by October 15, and about 70 percent of enterprises resumed operations by the end of December.

However, the current difficulty of Long An Province is the labor shortage. In the past few days, thousands of workers in Long An Province have spontaneously left for their hometowns. At present, some businesses under the "three-on-site" production model only have about 60 percent of employees compared to the actual needs. Therefore, to take the initiative in labor resources, the People's Committee of Long An Province suggested enterprises developing plans and policies to mobilize and bring workers from other provinces back to Long An Province for work as soon as possible. If non-native workers, who have not been vaccinated yet, return to Long An, the province will prioritize vaccination for them to go back to work soon. The People's Committee of Long An Province also requested the relevant sectors and the People's Committees of districts to encourage the owners of boarding houses to consider the exemption and reduction of rent in the first few months for workers. As for businesses, they must commit to prioritizing weekly pay for workers in the first two months.