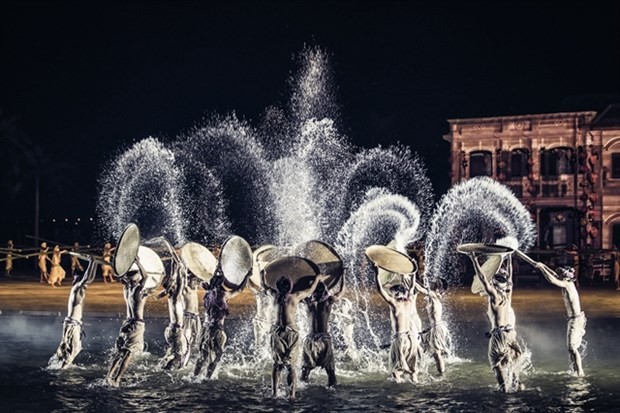 Dancers perform in the Hoi An Memories show in the Hoi An Memories Land in Hoi An city. The show is an attraction to tourists at night time. (Photo courtesy of Hoi An Memories Land)
A representative of the complex said the award ceremony took place on November 11, and the certificate of the world leading entertainment destination was voted on by voters of the 29th annual World Travel Awards.
The complex, which is the first and only combined art performance and resort in the UNESCO-recognised world heritage site of Hoi An and the tourism hub in central Vietnam, was designed as a ‘green’ site for domestic and international tourists.
It also hosts the Ky Uc Hoi An (Hoi An Memories) – a 60-minute show on the 400-year history and development of Hoi An during the Dai Viet (Great Viet) State in the 15th-18th century -- on the open-air stage in the middle of the Thu Bon River.
The show – which had been held for 500 nights since its debut in 2018, involves the performance of 500 artists, making it an amazing entertainment destination in Hoi An after lantern night in the old quarter.
The art performance features the daily life activities of people in Hoi An including silk trade, ceramic production, folk performances, busy trade and the culture of Japanese, Chinese and European through visits by merchant ships to Hoi An trading port during the 14th century.
The show was recognised as the leading historical spectacle at the Best Hotels-Resorts Awards by Wanderlust Tips in the Republic of Korea, and chosen to be on at Times Square, New York in the US in March of 2019.