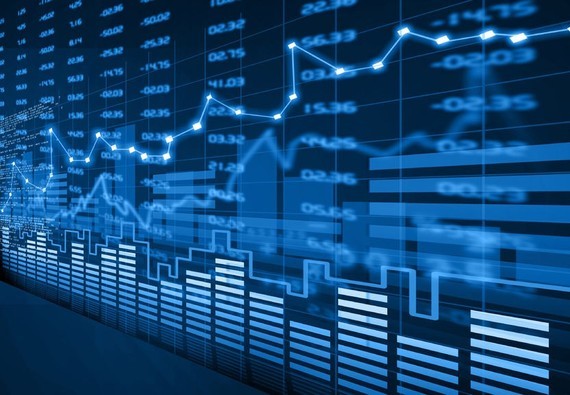 Illustrative photo
Limited resistance
The US inflation data for August just released right before the FED meeting in September sent worrying signals across the globe. Leading investment institutions and economists in the world are warning that inflationary pressures will increase further with a spiraling of prices and wages, which could even push the US economy into a recession by 2023.
On the other hand, one is seeing the opposite in Vietnam. As the momentum of production growth continued for the 11th consecutive month, the PMI index was above 50 points, August exports increased by 22.1 percent over the same period, retail sales of goods and services increased by 0.8 percent in August, and CPI only increased by 2.9 percent in August over the same period. Although GDP growth forecast in the third quarter and the whole of 2022 is still maintained very high.
The above optimistic internal factors have created a certain resistance which are helping Vietnam's stock market to adjust with the VN Index peaking at the end of August 2022 and only really correcting from 7 September. Meanwhile, the US stock market S&P 500 index peaked on 16 August and has been falling continuously by a margin of minus 10.4 percent, while the VN Index fell about 6.8 percent. However, the resistance is also limited, and Vietnam's stock market is reflecting more clearly on the pressures from external risks, which in the immediate future is the FED interest rate hike in September. Nonetheless, the last months of 2022 may be stronger than the market expects.
The pressure of the US dollar is weighing heavily on the Vietnam Dong, and in order to keep the exchange rate relatively stable for many months, there has been a certain sacrifice in the selling off of foreign currency. A recent report of ACB Securities Company estimates that the State Bank of Vietnam has sold off about US$21 bln from foreign exchange reserves since the beginning of 2022, equivalent to 19 percent of total reserves, and bringing the current reserve to an estimated level of only US$ 89 bln.
If the FED continues to raise interest rates strongly and continuously in September and the following months, this pressure will also continue to increase. This is again assisted by the risk that the main export markets of Vietnam such as the EU and the US will reduce growth, which may cause export turnover to decrease.
Long-term risk
Although recently there have been consecutive assessments that forecast Vietnam's economic growth to be still very positive in 2022, as well as the profit of listed companies to increase in the range of 20 percent to 25 percent, the real stock market does not look at the numbers. Corporate profits may still be high according to current numbers, but it is actually due to the advantages from the beginning of the year. Profit growth in the last quarter of the year is slowing down and 2023 may be a year of many difficulties.
On the other hand, the stock market is also coping with the fight against imported inflation as mentioned above. In order to keep the local currency from depreciating under the pressure of rising interest rates around the world, we will have to sacrifice credit growth or else we will have to raise interest rates. It is no coincidence that the stock market adjusted sharply after the State Bank of Vietnam allocated credit room in early September. The stock market realized that the credit was not larger but only structured from one place to another. The proof is that banking stocks immediately plummeted when investors were concerned that the potential for profit growth would decrease.
The limited lending capacity from the banking channel will also cause the cash flow to be withdrawn more strongly from all other channels, of which the stock market is a typical example. Large enterprises and smaller businesses will no longer have idle money to put in securities like in the period from 2020 to early 2022. It can be seen that the liquidity on the stock market is dropping sharply when a part of the money goes back into manufacturing, a part is withdrawn to pay corporate bonds before maturity, and a part is used for huge volumes of newly issued shares. From an average transaction of VND35,000 bln to VND40,000 bln a day, it has now dropped to only around VND10,000 bln to VND15,000 bln a day.
The FED rate hike by 75 basis points on 21 September may be the last bit of bad news in the short term, but it's just a fresh take on growing risks in the global fight against inflation. The message of the FED is still to resolutely curb inflation despite the discomfort factor, meaning that the growth rate will still be at this level for some time.
Looking at the long-term, the Vietnamese stock market reached the top of the bull market cycle in early April 2022 after the VN Index had increased 131% since the beginning of the cycle. The bear market recession cycle is always accompanied by macro risks and lasts for years, and only ends when the risks are relieved. For instance, the end of geopolitical tensions will reduce fuel and basic commodity prices, and supply chains will be restored. In that long-term downward cycle, there will be upswings in the opposite direction but that is only a short-term or medium-term reaction that will not change the main dynamics.