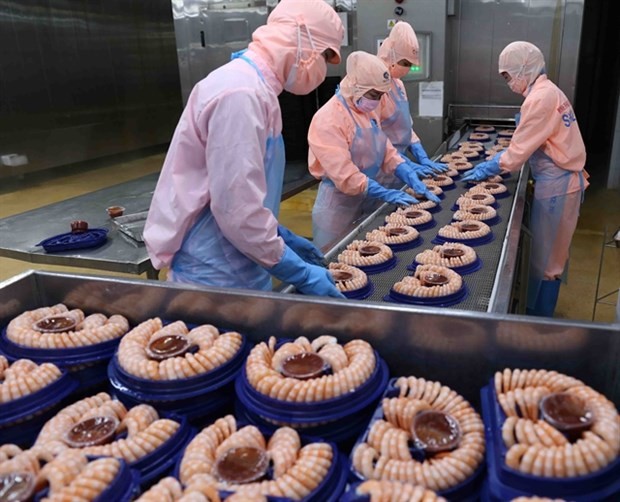 Shrimp processed for export at Minh Phu Seafood Corporation (MPC) in Hau Giang province. (Photo: VNA)
According to the Vietnam Association of Seafood Exporters and Producers (VASEP), seafood exports have rebounded with the figure for the first five months of 2021 reaching US$3.27 billion, up 14 percent over the same period last year.
Shrimp exports in May totalled $375 million, up 25 percent year-on-year, while that in the first five months reached $1.34 billion, up 14 percent. Similarly, pangasius brought in $134 million in May, up 26 percent and that for five months reached $623 million, up 12 percent. Other seafood products such as tuna, squid and octopus also witnessed growth.
Vietnamese seafood has the opportunity to increase its market share in the US market as India is heavily affected by the COVID-19 pandemic and Chinese enterprises reduce exports due to the US-China trade war.
Vietnamese shrimp is currently in the most consumed among Vietnam’s seafood export products to the US market, accounting for 21 percent of seafood exports. The US opened 50 states from May 20 after a long lockdown due to COVID-19, which was a factor promoting imports.
Pangasius exports to the US are also on the rise in the first five months of 2021, reaching $135 million, an increase of 57 percent compared to the same period last year.
As for tuna, the US is now the largest import markets of Vietnam's tuna, accounting for 42 percent of the proportion.
Besides the US market, businesses expect the EU to be the growth engine this year as the demand for shrimp and seafood products increases in the context of the COVID-19 pandemic being gradually controlled.
EU importers are now more interested in Vietnamese seafood suppliers thanks to tariff cuts from the EU-Vietnam Free Trade Agreement and stable source of raw materials.
By the end of May 2021, Vietnam's seafood exports to the EU reached $380 million, up 15 percent, in which shrimp accounted for nearly $199 million, an increase of 22 percent over the same period last year.
Higher revenue
Minh Phu Seafood Joint Stock Company (MPC), Vietnam's biggest shrimp company, targets revenue and post-tax profit of VND15.77 trillion ($683.4 million ) and VND1.1 trillion this year, up 10 percent and 62 percent, respectively compared to last year.
Le Van Quang, Chairman of the MPC's Board of Directors, said that in 2021, the company will maintain export markets of the US, the EU, Japan and expand to new markets, developing a high-tech industrial shrimp farming complex. The MPC's goal by 2045 is to capture 25 percent of the world shrimp market.
Nam Viet Seafood Joint Stock Company (ANV) plans to earn VND4.5 trillion in revenue and VND360 billion in profit after tax this year, up 30.8 percent and 80 percent, respectively compared to 2020. The company will boost exports to China, the EU, the US and Russia.
Vinh Hoan Joint Stock Company (VHC) targets to achieve revenue of VND8.6 trillion this year, up 22 percent, but the profit target is forecast at VND700 billion , down 3 percent compared to 2020. The company's total revenue in the first four months of 2021 increased by 61 percent over the same period last year.
VHC’s pangasius products increased by 54 percent. The company's export value grew in most markets, China by 246 percent, the US 130 percent, Europe 3 percent, other regions 12 percent.
This year, VHC plans to invest VND1.3 trillion , of which VND700 billion  will be to build an animal feed factory, a hatchery and a new farming area, VND200 billion to renovate factories and VND400 billion for other investments.
Overcome challenges
According to the MPC, in the first quarter of 2021, due to the impact of the COVID-19 pandemic, the prices of some raw materials, inputs and essential services for production and business all increased, especially cargo ship fees rising over 30 percent over the same period in 2020, affecting the company's profit, down 56 percent.
The first quarter has not yet entered the shrimp harvest season, thus the supply is scarce, causing the price of raw shrimp to increase, leading to the rise of costs.
At VHC, increased costs caused the profit in the first quarter of 2021 to decrease by more than 13 percent compared to the same period last year, to VND131 billion. Selling expenses rose mainly due to increased freight costs.
ACB Securities Company said that the inventory of raw pangasius in Vietnam is decreasing, while the demand for fish in the world recovers, so the price of raw pangasius may increase.
According to CSI Securities, seafood exporters are still facing challenges from high sea transportation costs due to a shortage of containers, which hinders exports to the US and EU. Meanwhile, some markets have adopted non-tariff barriers to limit and tighten controls on imported goods.