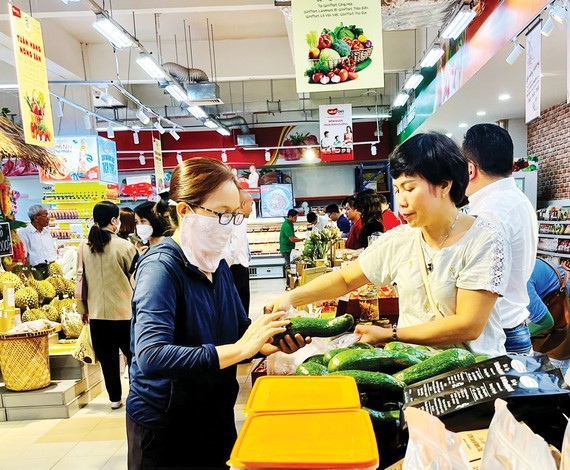 Small traders in some traditional markets in Ho Chi Minh City said that the month of promotion has contributed to increasing sales and attracting more customers. In addition, thanks to promoting sales through social networks such as Zalo, Facebook, and Viber, small businesses also retain regular customers and find more new customers.
While taking pictures, recording videos, and listening to the phone of old customers in faraway provinces, Phuong Trang, a small trader at An Dong Market in District 5, shared that after the epidemic, there has been a sharp increase in customers placing online orders.
In response to Ho Chi Minh City's promotion month, she has reduced the price of clothes by about 10 percent for both direct and online buyers. In addition, the store also bundles goods and offers a low price for customers. For example, before she earned VND15,000- VND20,000 as a profit, now she accepted a profit of VND5,000-VND10,000 for selling a shirt.
Similarly, at the Binh Tay Market in District 6, many small businesses specializing in confectionery products also sell at preferential rates to customers.
Small traders in Ben Thanh Market in District 1 and Hoa Hung in District 10 said they are willing to reduce the selling price from 10 percent to 15 percent, and offer promotions with onions and cilantro of all kinds for customers to increase purchasing power.
According to the Ben Thanh Market Management Board, there are currently about 180 stalls registered to sell promotional products, offering discounts for buyers from 5 percent to 30 percent. Purchasing power at the market is improving well, and the number of visitors to the market has nearly doubled on weekdays.
Small trader Mai Nguyen at Hoa Hung market said that leafy vegetables and fruits are not much profitable and have to be depreciated due to long-distance transportation, so a large discount will no longer be profitable.
However, small traders still share less pressure with buyers by giving some more vegetables, cilantro, or chili so that both sellers and buyers are happy.
Mrs. Le Kim Nhung, the owner of a grocery store in a small alley on Le Van Sy Street in District 3 sometimes gives a package of sweets, a bottle of cooking oil or fish sauce, or a few eggs to her customers. Although her gifts are of small value, sellers are happy.
A representative of An Dong Market Management Board acknowledged that thanks to the promotion month, the purchasing power has improved significantly, increasing by about 15 percent compared to a few months ago expecting that from now until the end of the year, the market's sales force will recover better.
Purchasing power from trade centers and supermarkets also increased significantly, especially in this promotion month. This is a positive signal showing the interest of many consumers when prices are still escalating day by day without signs of cooling down.
Supermarkets Co.opmart, BigC, Go! Also announced their purchasing power has increased significantly in recent days, especially on weekends, the number of customers flocking to have fun and shopping is crowded. For example, the MM Mega Market system in District 12, Thu Duc City, District 6 and the Emart system Go Vap are always crowded with customers on Saturday and Sunday.
Resident Nguyen Van Tuan in Le Van Khuong Street in District 12, said he and his family members usually go to the Emart supermarket on Saturday and Sunday.
Currently, a series of products including consumer goods, cosmetics, vegetables, fruits are deeply discounted by trade centers and supermarkets, with items reduced from 90 percent to 100 percent. For example, Lux House and Cresent Mall stores are offering the highest discounts up to 90 percent. Van Hanh Mall in District 10 also has a big discount for fashion clothes, and garments of all kinds. Co.opXtra, Co.opmart discounts from 5 percent to 50 percent for fruits, vegetables, cooking oil, milk, and household items.
According to the Ho Chi Minh City Department of Industry and Trade, purchasing power since the launch of the promotion month has gradually improved. Bustling trade markets make business activities more vibrant and alive. With commercial centers, amusement parks, and shopping malls, because it is the peak of summer, the number of people flocking is also larger than usual.