After the award-winning ST25 rice rightfully earned a firm footing on the market, it and other varieties from the Mekong Delta region became highly sought-after. This fragrant rice variety sells for VND30,000-45,000 per kilogram (US$1.3-1.95) and is still seeing high demand after the Lunar New Year shopping craze ended.
Farmers from Soc Trang Province, where ST25 rice is cultivated, raked in double the year-on-year profit at about VND40 million (US$1.734) per 8 tons.
“We even had retailers offering to buy our yields long before harvest, which is very rare and proves the apparent demand for high-quality fragrant rice”, said a local field owner.
Mekong Delta farmers up to now have harvested some one-third of the region’s total rice crops for the period, with an average yield of over 7.3 tons per hectare.
Seeing that high-end white rice and fragrant rice make up nearly 90 percent of the products, Soc Trang province is requesting the provincial Center for Agricultural Seeds to focus more on the production and supply of these varieties to meet local demands.
Meanwhile, Hau Giang Province has been promoting the Vi Thuy fragrant rice variety produced in an eco-friendly safety food chain. The province plans to expand cultivation areas to 500 hectares, said the director of Hau Giang’s Department of Agriculture and Rural Development. 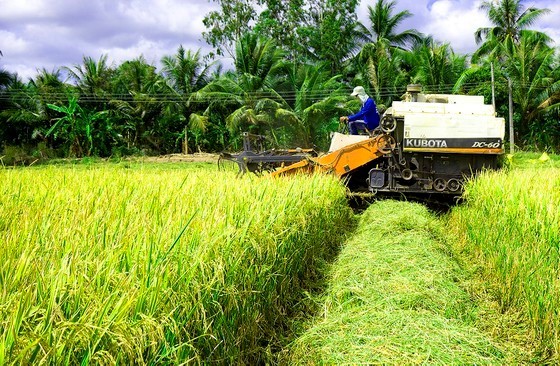 Rice harvest in the Mekong Delta

The Vi Thuy brand was rated a 4-star eco rice product by the domestic OCOP program (One Commune One Product) which prompted Hau Giang authorities to promote the safety production chain to local farmers.

On a nationwide scale, restructuring the agriculture sector by cutting off inefficient yields has boosted rice production significantly, as well as created opportunities for up to 6 million tons of Vietnamese rice to enter EU markets per year, said business insiders.

Although the EU market demands some 2.1-2.3 tons of rice per year, only 80,000 tons of Vietnamese exports can enter each year under regulations of the EVFTA.

The Asian country in recent years has commanded international attention with multiple global award-winning rice varieties. Experts believe Vietnam in the near future can export as many as 1 million tons of white fragrant rice at over US$1,000 per ton, earning US$1 billion in foreign currency each year.

To further promote Vietnamese rice, there have been proposals for the Ministry of Agriculture and Rural Development and the Ministry of Industry and Trade to set up a national committee for the rice industry in associations with domestic cooperatives and overseas trade counselors.