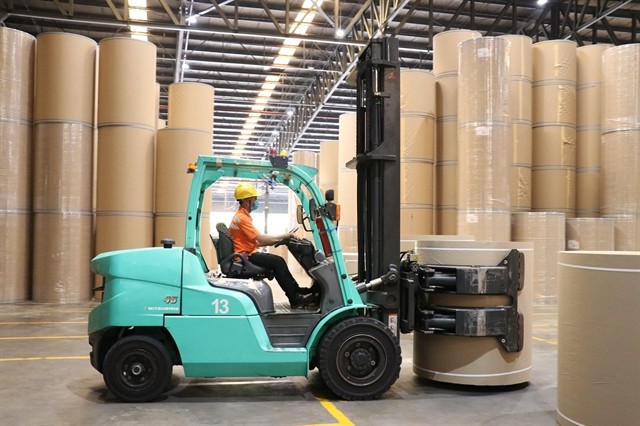 A factory of Vina Kraft Paper Co which is being financed by Thai and Japanese investors in the southern province of Binh Duong. (Photo: VNS)

Up to 1,212 foreign-invested projects were licensed with a total registered capital of $12.5 billion in the period, down 37.8 percent in the number of projects but up 20.6 percent in value over the same period last year.

Meanwhile, 678 operating projects were allowed to raise their capital by $6.6 billion, a year-on-year rise of 25.6 percent in capital but down 15.8 percent in project number.

Capital contributions and share purchases by foreign investors stood at nearly $3.2 billion, down 43.8 percent from the same period last year, according to FIA.

The decreases in the numbers of new, expanded projects and paid-in capital for share purchase were attributed to Vietnam's selective investment attraction policies that would prioritize quality of projects rather than quantity, while eliminating small-scale projects with low added value, FIA said in its monthly report.

Travel restrictions and long quarantine policy made it hard for foreign investors to make surveys for their planned projects, the agency said.

Due to factory closures and labor shortages for production, many orders had been shifted by foreign investors to other areas in their supply chains. Although this was only a temporary solution, if this situation continues, investors would likely relocate their production facilities to other countries, FIA warned.

Among 18 sectors receiving FDI in the nine months, processing and manufacturing took the lead with $11.8 billion, accounting for 53.4 percent of the total FDI. It was followed by power production and distribution with over $5.5 billion; real estate with $1.78 billion and wholesale and retail with over $750 million.

Singapore led 94 countries and territories investing in Vietnam in the period with total investment capital of nearly $6.3 billion, making up nearly 28.4 percent of the total FDI registered in the country. However, the total investment of Singaporean investors plunged 7.2 percent year-on-year.

South Korea surpassed Japan to rank second with over $3.9 billion, up 23.4 percent year-on-year or equivalent to 17.7 percent of the total FDI. Japan came next with nearly $3.3 billion, up 89 percent or 14.7 percent. Other leading sources of Vietnam's FDI were from mainland China, Hong Kong and Taiwan.

The Mekong Delta province of Long An attracted the highest amount of FDI, with over $3.6 billion, or 16.4 percent of the total thanks to the Singapore-invested Long An liquefied natural gas power plant project worth $3.1 billion.

Other localities having received FDI in nine months included Binh Duong, Can Tho, and Quang Ninh.

However, big cities with sufficient infrastructure such as HCMC, Hanoi and Bac Ninh won in terms of the number of projects. Among them, the southern economic hub led the country in the number of new projects, making up 33 percent while the capital city ranked second, making up 21 percent though it was not among the top five localities attracting the largest amount of FDI in the nine-month period.

According to FIA, foreign-invested businesses posted a trade surplus of nearly $18.2 billion in the January-September period as they gained $178 billion from exports, a yearly hike of 23 percent while their imports hit $159.8 billion, up 34.4 percent.

Among 141 countries and territories, South Korea was the largest source of Vietnamese FDI with $73.8 billion, making up 18.3 percent of the total FDI registered in the country. It was followed by Japan with $63.9 billion or 15.8 percent.