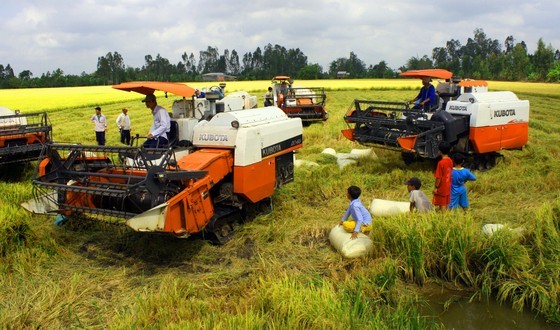 Mechanization of rice harvesting is the strength of the Mekong Delta. (Photo: SGGP)
“Reducing the volume of rice seeds for direct seeding is the key to the success of Vietnamese rice,” emphasized Mr. Le Thanh Tung, Deputy Director of the Department of Crop Production under the Ministry of Agriculture and Rural Development (MARD), at the Conference on the preliminary review of the production of the autumn-winter and winter rice crop in 2022 and the implementation of the production plan for the winter-spring crop 2022-2023 in the Southeast region and the Mekong Delta, held on September 22 in Can Tho City.

According to a report from the Department of Agriculture and Rural Development of the Southeast region and the Mekong Delta, the rice production area in 2022 is estimated at 4.12 million hectares, with a rice output of over 25.5 million tons. At the conference, representatives of the Department of Crop Production, institutes, universities, and leaders of the agricultural sector in the region assessed the positives and negatives of production in 2022. Specifically, the rice production industry has made great efforts. Although the rice growing area has decreased, rice production has remained stable.

Notably, the 400,000ha of rice in the area often threatened by drought and saltwater intrusion has adapted to safe production. The application of mechanization by farmers in direct seeding by drones has also significantly reduced the volume of seeds. As a result, the amount of rice seeds of less than 100 kg per ha for direct seeding is showing positive changes, and that of higher than 150 kg per ha tends to decrease, while that of 120 - 130 kg per ha is being implemented in provinces. However, this process is still slow. 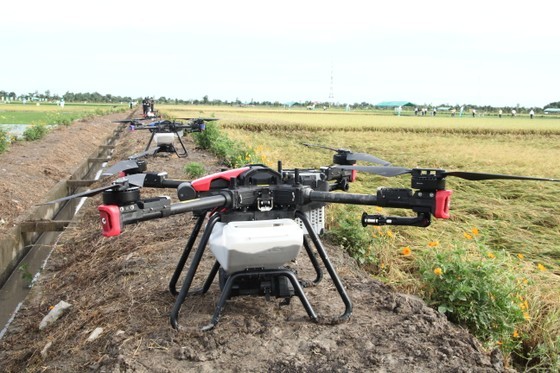 The application of mechanization by farmers in direct seeding by drones has also significantly reduced the volume of seeds. (Photo: SGGP)
According to Mr. Le Thanh Tung, Deputy Director of the Department of Crop Production, it is necessary and urgent to reduce the amount of rice seeds for direct seeding to about 80kg per ha, which is the key to reducing the cost of rice production. When the amount of rice seed is reduced, the costs of fertilizers, pesticides, and irrigation will decrease in tandem, and farmers' profits will increase.

Mr. Le Thanh Tung added that the greater meaning of reducing the volume of sowing seeds is to increase the competitiveness of rice exports. At the same time, when reducing the amount of seeds, fertilizers and pesticides will be cut; Hence, the food safety levels will increase, facilitating Vietnamese rice to meet the standards of fastidious importing countries, such as Europe, Japan, and South Korea. It is an opportunity to build a safer and more friendly Vietnamese rice brand.