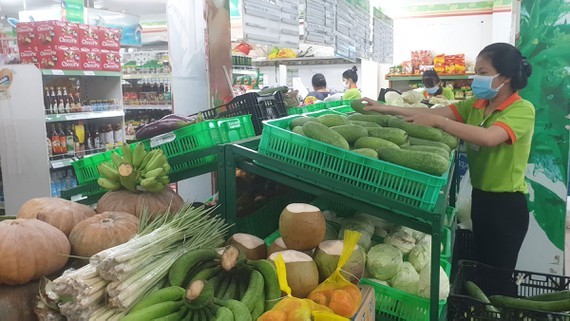 Supermarkets continuously refill its stock
At Vinmart Cong Hoa in Tan Binh District, BigC Truong Chinh in Tan Phu District, or Co.opmart Nguyen Kiem in Phu Nhuan District, only a few staff went to the market buying commodities for dwellers in blocked residential zones from 9 am to noon whereas they had to queue in lines to wait for their turn before. Supermarkets only open 2-3 cashier counters, instead of 5-10 counters like a week ago.

Representatives of supermarkets said that the purchasing power of the market-goers reduced by 40 percent-60 percent compared to that a few weeks ago.
According to supermarket representatives, some convenience stores, grocery stores or eateries, restaurants, and coffee shops have switched to selling fresh food.
In addition, the number of delivery workers has surged to 35,000 in just the past few days who mainly transported goods for online orders of convenience stores, grocery stores or eateries, restaurants, and coffee shops.
Due to the decrease in purchasing power, supermarkets have not continuously refilled their stocks any longer, prices have increased slightly in some items such as vegetables while fresh foods and vegetables are relatively stable.
Previously, in order to ensure sufficient supplies when deliverymen had been allowed to travel from district to district, retail businesses have stockpiled goods to cope with possible panic buying as well as increased online sales.
For example, Co.opmart, Co.opXtra, Co.op Food supermarkets have both stored sufficient essential goods and supplied them suitably for each residential quarter which have been practicing social distance mandates.
Saigon Co.op's retail will expand its online sales channel to serve city dwellers who are not allowed to buy commodities as well as sufficiently increase door to door delivery service by bus through the Co.op Food chain of food stores.
Similarly, Satra supermarket chain has quickly resumed the operation of Satrafoods stores and implemented online sales through applications, speeding up the delivery of goods to buyers as soon as possible. Up to now, Satra has re-operated its 165 Satrafoods convenience stores in Ho Chi Minh City. The supermarket chains have been issued more travel permits, Satrafoods has gradually operated as it had been when the city has not implemented strict social distancing mandates.
According to a Satra representative, during the social distancing, the Satra retail system has so far been constantly negotiating with existing suppliers as well as seeking new suppliers to ensure an uninterrupted supply of commodities as well as keep the price stable and reasonable.
According to data from the Ho Chi Minh City Department of Industry and Trade, more than 2,700 goods supply points, including 92 supermarkets, nine traditional markets and over 2,100 convenience stores have been resumed their operation to provide essential goods.
In particular, all three wholesale markets have been put into operation as transshipment points with hundreds of tons of goods per day and night, ensuring continuity of supply of goods to the market and meeting city inhabitants’ needs.
About the question of consumer goods price hikes, the Department of Industry and Trade ministries and departments will coordinate to adjust and remove obstacles. The circulation of goods will gradually be better, so prices of consumer goods will soon be stable again.