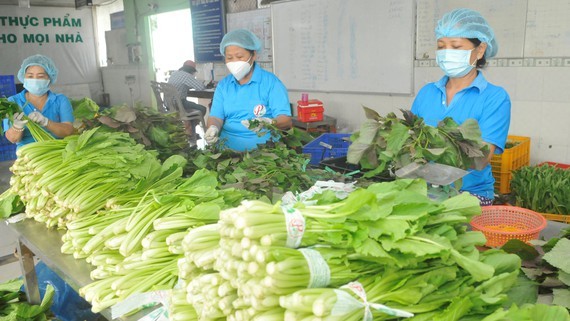 Prices of vegetables climb sharply because of the Covid-19 pandemic and bad weather. (Photo: SGGP)
Some businesses trading vegetables, fruits, and fresh foods in District 12 said they had received notification about the price increase from suppliers from the end of September this year. The reason for the price increase is that production costs and input materials all climbed compared to half a year ago.

The Director of an enterprise in HCMC admitted that after negotiating many times with suppliers, his company was forced to raise the selling prices for about 70 percent of its products. The remaining 30 percent, although the contracts still committed to the old price until the end of 2021, it was not guaranteed that prices would not increase at Lunar New Year because several contracts would be signed again by the end of December.

In Da Lat, after a period of stagnation due to difficult consumption, lately, prices of vegetables and flowers in Da Lat and surrounding areas, such as Don Duong, Duc Trong, and Lac Duong districts of Lam Dong Province, have risen sharply. Specifically, broccoli fetched VND20,000 per kg, an increase of VND2,000 per kg; chayote VND6,000 per kg, up VND3,000 per kg.  The sharpest increases were in green coral lettuce with VND17,000 per kg to VND35,000 per kg and bell pepper with VND23,000 per kg to VND45,000 per kg, compared to the previous week.

According to the HCMC Department of Industry and Trade, the source of goods arriving at the city at the end of the year is quite diverse, so consumers should not worry about the shortage of goods. Currently, the selling prices of goods at supermarkets, trade centers, and traditional markets have been committed to stabilizing by some units. Besides, many promotional and shopping stimulus programs will also be activated on the occasion of the New Year and the Lunar New Year, helping consumers to have more choices.


The prices of vegetables remain expensive in the North

While the prices of pork, poultry, and waterfowl are still at a very low level (although they have recovered compared to more than two weeks ago), the prices of vegetables on the market in Hanoi and some places in the North are still unusually high.

According to farmers in vegetable growing areas on the outskirts of Hanoi to supply wholesale markets in the inner city, such as Hoai Duc, Dan Phuong, Phuc Tho, and Dong Anh districts, the main reason for high vegetable prices is due to prolonged rain and severe weather. This year, it has more rain than the previous year.