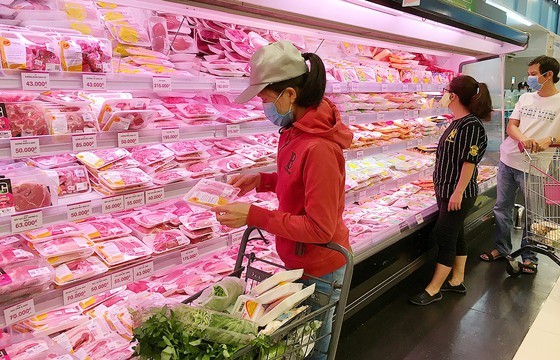 Meat  is plentiful in a Saigon.Co.op supermarket
An adequate supply of agricultural products and food in wholesale markets in the city meets the demand. For instance, approximately 3,300 – 3,400 tons of vegetables and fruit are transported to wholesale markets in Thu Duc City.
Seasonal rainfall hits veggie supplies. Seasonal rain has reduced the supply of veggie sending prices of vegetable especially leafy vegetables increasing slightly, wholesalers said. Vegetable gardens are waterlogged resulting in a dwindling supply while demand is high.
The prices of mustard green have gone up by 17 percent compared to the prior day or increased by VND2,000 per kilogram. Bitter melon is being sold at VND5,000 a kilogram while zucchini and gourd soared by VND2,000 a kilogram.
Prices of vegetables and fresh meat are steady in supermarkets. Prices of fruits remained unchanged. Supermarkets of Saigon Co.op are selling Thieu lychees, a unique fruit of the northern provinces of Hai Duong and Bac Giang. This year, Saigon Co.op decided to sell lychees grown in the Central Highlands Province of Buon Ma Thuot. Director of Saigon Co.op Nguyen Anh Duc said the supermarket chains have planned to transport lychees from Bac Giang, Hai Duong and Buon Ma Thuot to serve customers in Ho Chi Minh City and help farmers to sell the fruit.
Presently, the fruit is sold at VND 21,900 – VND40,500 per kilogram at Co.opmart, Co.opXtra supermarkets. Around 400 tons – 500 tons of lychees are expected to be consumed in the supermarket chains this year.