Dong Nai Province is currently the leader in repopulation and recovery of pig herds after the African swine fever (ASF).

According to data from Dong Nai Statistics Office, up to now, the total pig herd in Dong Nai Province has reached about 2.2 million pigs, up nearly 10.8 percent over the same period last year. Most of the large-scale pig farming facilities, which fully ensure safety conditions, have continued to expand the farming scale, speeding up the growth of pig repopulation. During and after ASF, some new businesses in the livestock sector still focus on expanding investment and start to have an abundant source of market hogs to provide the market.

According to Ms. Nguyen Thi Huong, Director of Huong Vinh Cuu One Member Limited Company, despite difficulties due to the ASF epidemic, over the past time, her company has expanded its farming scale with three large farms, a slaughterhouse, and two outlets selling safe pork.

Moreover, the owners of small-scale pig farms in Dong Nai Province have also strived to increase their pig herds. Suffering heavy losses after the outbreak of ASF, Tran Van Khanh, a pig farm owner in Vinh Cuu District, decided to change the pig-farming method. To ensure safety, he spent VND1 billion to invest in a standard cold pig barn and contracted for outsourcing pig farming for enterprises. In the past, Khanh raised 1,000 market hogs, but now he has expanded the farming scale to 1,500 porkers for Tet holidays.

Nguyen Van Dao, another pig farm owner in Vinh Cuu District, said that the farm had been increasing its breeding stocks to expand the farming scale. Currently, on average, his farm provides 100 market hogs per month to the market. In Cam My District, small pig-farming households are also repopulating their pig herds, and together with the large farms in the district, the total pig herd of the district has risen to 200,000 pigs, reaching more than 85 percent compared to the total pig herd before the ASF epidemic.

According to the leader of the Department of Industry and Trade of Dong Nai Province, the pig-farming industry still faces great risks, but the pork market during Tet holidays is unlikely to suffer a shortage of pork as supply has been guaranteed. With the number of pigs that Dong Nai Province currently has, from now to the Lunar New Year, a shortage of pork supply for HCMC and neighboring provinces is unlikely to happen. The department had worked with livestock groups and slaughter companies to get the data on pork supply.

In the Mekong Delta, provinces have also been struggling to restore pig herds to supply the Tet market. In Ben Tre Province, Mr. Doan Van Danh, Director of the provincial Department of Agriculture and Rural Development, said that with the current pig herd of more than 350,000 pigs, the province could still ensure the supply for the upcoming Lunar New Year. 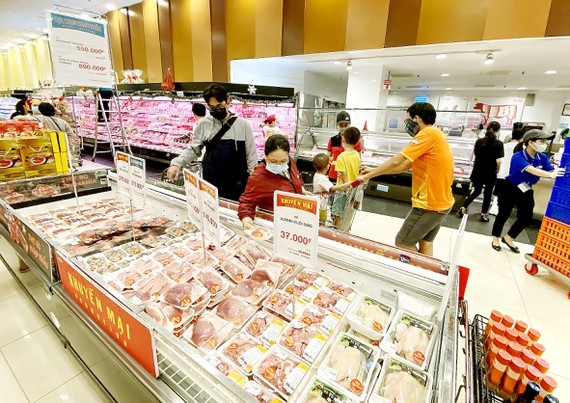 Consumers buy pork at Aeon Mall Tan Phu in HCMC. (Photo: SGGP)
Many pig-farming households in Chau Thanh District in Tien Giang Province said that at present, the price of live pigs bought by traders is not high, so some households will keep their pigs till near the Lunar New Year to sell. According to Nguyen Van Cuong, a local pig-farming household, the price of porkers weighed at the barn was VND8 million per quintal, while traders sold porkers at about VND8.5 million per quintal. This price level is still profitable for pig farmers. However, compared to the previous year, this price is about VND500,000 per quintal lower. Therefore, his family still holds their pigs to wait until the price is high, then they will sell.

In Dong Thap, Mr. Bach Tuan Kiet, Head of the Department of Disease Control under the Department of Livestock Production, Veterinary, and Fisheries of Dong Thap Province, said that the total pig herd in the province was more than 71,000 pigs in October last year. The provincial authorities have actively implemented detoxification and disinfection, coordinated with localities to thoroughly handle the outbreak, and promptly repopulate the pig herds to serve the Tet market.

Besides the number of pigs raised in provinces, the number of live pigs imported from Thailand has also increased sharply. The increase in imported frozen pork in the fourth quarter of last year has also made the supply of pork plentiful.

The prices of pork change constantly

At this time, the pork products sold on the HCMC market are plentiful and diverse. The general purchasing power of pork on the market has dropped sharply over the same period. From the beginning of January this year to now, the price of live hogs has climbed continuously, from VND74,500 per kilogram to VND80,500, causing the demand for pork of consumers to somewhat weaken.

Mr. Le Van Tien, Deputy Director of Hoc Mon Wholesale Market, which provides about 50 percent of pork production to the HCMC market, said that until now, it is unknown that how much the price of live hog will increase. Noticeably, although the price of pork has escalated, the number of pigs arriving at Hoc Mon Wholesale Market has not declined, still fully meeting the new consumption demand at around 4,500 - 4,600 pigs per day.

In recent days, at Han Market in Hai Chau 1 ward, in Hai Chau District in Da Nang City, the prices of pork change every day, causing difficulties to small traders. Five out of 15 meat stalls at Han Market have temporarily closed earlier. The atmosphere of buying and selling activities during the days near Tet has never been so gloomy.

Similar to HCMC, according to Mr. Nguyen Huu Hanh, Deputy Director of the Department of Industry and Trade of Da Nang City, pork is expected to see high demand on the occasion of Lunar New Year, so the department has called for local enterprises with the capability and experience in production, supply, and distribution of pork products to participate in selling price-stabilized pork for Tet holidays. The selling points in the market stabilization program are expected to be held from February 9 to 11, from 6.30 a.m. to 8.30 p.m.

In fact, increasing pork price not only directly affects consumers' pockets, but it also makes traders worry. The purchasing power will be unable to jump as expected because consumers will cut down spending or use other kinds of foods. Many people believe that if the price of live hogs during the Lunar New Year hovers around VND78,000-VND80,000 per kilogram, it will stimulate purchasing power better. At the same time, it will pull down the CPI increase in the month of Tet holidays because pork currently accounts for a fairly high proportion in the proportion of foods of the people.

Amid market developments, the current supply of pork and the stock for the upcoming Lunar New Year is quite plentiful and diverse. However, why have the prices of pork constantly increased in the past few days? Because the strong purchasing power leads to a scarce supply or other reasons? According to many economic experts, authorities need to find satisfactory answers for these questions soon to guarantee the interests of consumers, contributing to stabilizing the market in the peak business season before the Tet holidays.