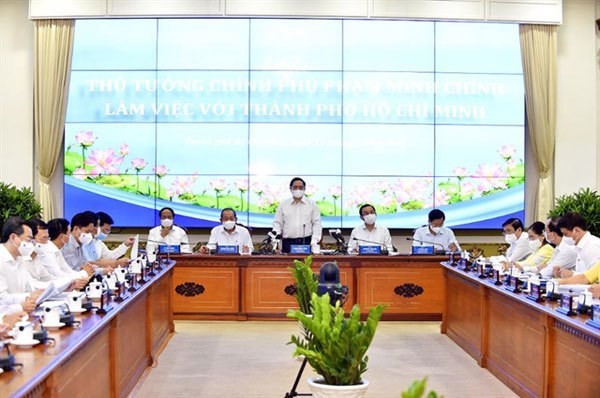 Prime Minister Pham Minh Chinh speaks at a recent meeting with HCMC's leaders. (Photo: VNA)
HCMC is the country’s economic powerhouse with a significant GDP contribution to the national budget, the PM said at a recent working session with municipal leaders.

Dr. Huynh The Du, public policy lecturer at Fulbright University, said the city needs to be highly competitive to attract large businesses, a highly skilled workforce, and well-off people compared to other cities in the region and in the world.

China, for example, has spent a lot of resources on big cities, he added.

At the working session, Nguyen Thanh Phong, Chairman of the municipal People’s Committee, proposed that the government approve the budget retention rate of 23 percent instead of the current 18 percent over the next five years.

In the first four months, the city posted a budget collection of VND140 trillion ($6 billion), up 15.7 percent year-on-year, Phong said.

The low budget retention rate has prevented the financial hub of HCMC from addressing traffic jams and school shortages.

With only 9 percent of Vietnam’s total population, the city contributes 24 percent of the country’s GDP.

Experts said the city does not have enough money to build more roads as the percentage of retained budget revenue is too low.

The city also needs 10,000 additional classrooms every half decade to keep pace with the population increase, with each classroom hosting a standard 30 students. It currently has to pack 40-60 students into a single room, they said.

According to the Department of Planning and Investment, the city’s total retail sales of goods and revenue from consumer services in the first four months was up 7.9 percent year-on-year.