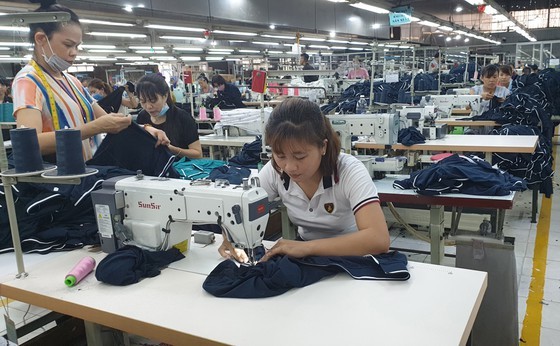 It was recorded at Fly High Garment Co., Ltd in Go Vap District that nearly 10 production lines with over 300 workers were rushing to finish orders of clothes and T-shirts to be exported to the USA. Mr. Ly Yung Chinh, Director of Fly High Garment Co., Ltd, said that the company currently has had production orders until the end of the year with an output of about 2 million items. However, because the market was facing difficulties in the source of raw materials, the company has only officially signed production contracts for about 500,000 items.

‘Depending on the developments of the pandemic and the source of raw materials, the company will continue to sign other orders to avoid compensation when failing to deliver goods as committed,’ Mr. Ly Yung Chinh shared.

Similarly, Thanh Cong Textile Garment Investment Trading Joint Stock Company informed that the company had received orders until the end of the second quarter of this year, so it can ensure the workload in the coming months.

Contributing nearly US$10 billion in the total export turnover of more than $39 billion of the garment and textile industry, up to now, most enterprises of the Vietnam National Textile and Garment Group (Vinatex) with an export scale of about several hundred million US dollars per year have also had customers for this year, especially focusing on items, such as knitwear and casual clothing, with large consumption. Vice-Chairman of the Vietnam Textile and Apparel Association (Vitas) Tran Van Cam confirmed that most garment and textile enterprises have had orders until the end of June, some enterprises have had orders until July and August like Saigon 3 Garment Joint Stock Company, Saigon Garmex, and Viet Tien. Main consumption is still traditional markets, namely the US, Europe, and Japan. "Although the number of orders is not as many as before the pandemic, the fact that enterprises have enough orders to maintain production lines and jobs for workers is a positive element for the recovery process of the garment and textile industry, the representative of Vitas commented.

According to Vitas, with the Covid-19 vaccination and the ability to obtain large-scale immunity in the last six months of the year, the garment and textile industry will continue to receive more optimistic information. Accordingly, garment products in the last six months of the year are usually autumn-winter clothes with higher value. Therefore, the growth rate for the whole year will possibly reach 10 percent, and Vietnam's textile and apparel can regain the export level as before the pandemic, at least one year earlier than many countries in the world.

Despite being quite optimistic about the orders, Vitas also warned that the domestic garment and textile enterprises would face numerous difficulties. For instance, from December last year until now, the yarn price has surged by 25 percent, while the selling prices of fabrics have not increased correspondingly. Yarn prices increased strongly because the global yields of the last cotton crop were low, and the global cotton inventories have also decreased. ‘It is expected that the amount of cotton consumed this year in the world will exceed the harvestable amount of cotton by 1 million tons,’ said Mr. Le Tien Truong, Chairman of the Vinatex. Besides, enterprises also face risks in pandemic control. Because if they do not control well, and the pandemic occurs in their factories or unfortunately, the factories are in the pandemic-hit area and must be closed, enterprises will suffer huge losses.

To support enterprises to stabilize production in the new situation, Vitas has just sent a proposal to the competent authority to allow using resources from support packages that have not been used up to help enterprises and workers, with more accessible conditions, and extend the support duration to at least until the end of this year. Specifically, the association proposed authorities continue to reduce land rent, electricity, and water charges, defer the payment of value-added tax and corporate income tax, freeze, reschedule, and restructure debts, and prolong the suspension of statutory contribution to the retirement and survivorship funds for disadvantaged enterprises until the end of this year. Vitas also petitioned the Government and other relevant agencies to have the policy of reducing road use charges, BOT fees, and port infrastructure fees. The Government and ministries and agencies should intervene to prevent the unusual overcharging in shipping prices and the ongoing shortage of empty containers. Localities should have a unified policy in the circulation of goods between localities and should not cause difficulties for businesses, said the representative of Vitas.
According to the World Bank's global garment of textile market report, the total global garment and textile demand is expected to increase from $594 billion in 2020 to $654 billion in 2021, up 10.1 percent over the same period. Of which, the textile and apparel import turnover of the US - the major export market of Vietnam's garments and textiles – will surge 20 percent over the same period, to $115 billion. Domestically, the growth rate for this year will reach 10 percent and may return to the peak export level like in 2019.