Imported products are chosen by many consumers. (Photo: SGGP)
At the forum, many businesses said that the US market had been recovering strongly, creating a great opportunity for Vietnamese enterprises to accelerate exports. However, the imposition of many trade remedies of the US has been negatively affecting the export activities of Vietnamese enterprises.

The consumer market is wide open

Mr. Bui Huy Son, Counselor of the Vietnam Trade Office in the US, said that although the Covid-19 pandemic had a negative impact, the import and export turnover of Vietnam and the US still hit the US$100 billion mark in 2021. Mr. Son acknowledged that the US economy would continue to grow at about 2 percent from now until 2025. The supportive policy packages from the US Government are bringing into full play the positive impacts on activities to recover production of US enterprises, promoting domestic consumption demand. Meanwhile, the disruption of the supply chain in the past time has significantly affected the supply of goods to the US market. These factors have been creating opportunities for Vietnamese enterprises to increase exports to this market.

Mr. Nguyen Liem, General Director of Lam Viet Wood Joint Stock Company, the representative of the Association of Textile, Agro-Fisheries, Wood, and Plastic Enterprises, said that member enterprises had been speeding up to bring goods to the US market. In November alone, wood export turnover hit $1.15 billion, an increase of nearly 21 percent compared to October. This figure is expected to be higher in December when enterprises step up production to deliver goods to their partners in time.

A representative of the Vietnam Association of Seafood Exporters and Producers also said that the export target of $8.1 billion by the end of this year would be feasible as the US - the main export market – has entered the peak shopping season at the end of the year.

According to businesses, difficulties, such as production disruptions due to the pandemic and the sharp increase in logistics costs, have already been removed. Domestic enterprises have negotiated with their partners to adjust prices and delivery deadlines. Moreover, enterprises of the two sides have jointly supported digital transformation in production and trade activities, and at the same time built supply chains to reduce costs, and reinvested in production technology to gradually meet the needs of large orders placed by US partners.

Besides the positive effects, Vietnamese exports to the US market also face many risks from the trade remedy measures that this country applies. Currently, most of the groups of agricultural, forestry, and fishery products, wood, metal, car tires, machinery, and equipment exported from Vietnam to the US market are facing trade remedy lawsuits. 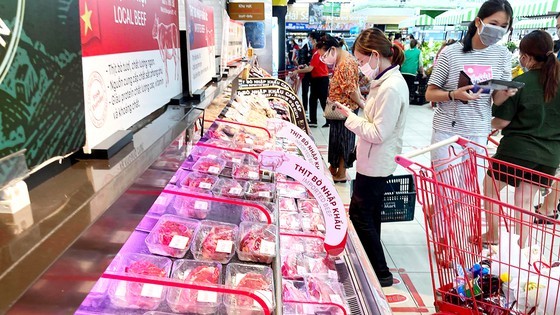 Imported products are chosen by many consumers. (Photo: SGGP)
According to Chairman of the Vietnam Beekeeping Association Dinh Quyet Tam, most recently, on November 23, the US Department of Commerce imposed an anti-dumping tax of 412 percent on honey products imported from Vietnam. Meanwhile, despite also being subject to investigation, Indian bee products were only levied a symbolic tax rate of 6.4 percent. "It has negatively affected the production and export activities of 10,000 workers and 25,000 Vietnamese beekeeper households, especially those in the mountainous and difficult regions of Vietnam," said Mr. Tam. Currently, the US market consumes 90 percent of Vietnamese honey exports, equivalent to about 50,000 tons of honey per year. So with the dumping tax, it also means that the US has completely closed its door to Vietnamese bee products.

Faced with the above fact, Deputy Director of Trade Remedy Authority under the MoIT Pham Chau Giang said that the ministry had been working with the US Government about products that were being subject to trade remedy tax, tightening control on the origin of exported goods, avoiding origin frauds that negatively affect trade with the US.

However, according to economic experts, besides changing the policies in line with the digital economy and creating opportunities to expand market share to other countries, Vietnamese enterprises also need to be more proactive in increasing investment in the US to expand market penetration and reduce the risk of being imposed technical barriers. At the same time, they must strengthen digital transformation, invest in technology, train human resources, change management capacity to avoid falling behind the trend of online trading.

In the opposite direction, affirming that the US Government had opened the door for Vietnamese exports, Ms. Mary Tarnowka, Executive Director of AmCham Vietnam, said that Vietnam must create more favorable conditions for US businesses investing in energy, healthcare, pharmaceuticals, education, digital transformation, artificial intelligence, and agriculture. Currently, Vietnam's administrative procedures and import taxes are causing many difficulties for foreign enterprises. Especially, Vietnam's tax policy applied to imported goods is quite strict. All these factors have harmed the import and export activities of enterprises and need to change soon in order to establish a fair investment and trading environment for enterprises of both countries.


According to the MoIT, in the past 25 years, the two-way trade turnover between Vietnam and the US has increased 168 times, from $450 million in 1995 when the two countries established diplomatic relations to $1.5 billion in 2001 when the two countries signed a bilateral trade agreement and $90.8 billion in 2020. According to Vietnam Customs, by the end of October, the total turnover of bilateral trade between Vietnam and the US hit $89.6 billion. Of which, Vietnam exported to the US $76.7 billion, up 22.9 percent over the same period last year, accounting for 28.4 percent of total export turnover, and imported from the US $12.9 billion, up 13.2 percent year-on-year, accounting for 4.8 percent of total import turnover. Accumulated to October, the US ranked 11th out of 138 countries and territories with FDI capital in Vietnam, with 1,134 projects and total registered capital of $9.72 billion.
The US - the mainstay market

According to Deputy Minister of Industry and Trade Do Thang Hai, Vietnam has the advantage of a potential market with a population of 100 million people. Vietnam has signed 15 free trade agreements (FTAs), creating a certain attractiveness in drawing foreign investors. The US ranks 11th in terms of investment capital in Vietnam. In the opposite direction, the US is the main and traditional export market of Vietnam. However, in recent times, many trade remedy measures have been applied by the US to many key export product groups of Vietnam, which have had certain impacts on domestic enterprises. Therefore, in the spirit of cooperation, Vietnam identifies the US as a pillar partner. The MoIT hopes that the two countries will promote dialogue to remove inadequacies in trade policies, create conditions to promote trade and investment between the two countries in the coming time, especially, limit the use of trade remedy measures in trade, avoiding causing negative impacts on the production activities of enterprises that have been seriously affected by the pandemic.

US businesses promote investment in Vietnam

Ms. Mary Tarnowka emphasized that 100 percent of member enterprises of the American Chamber of Commerce in Vietnam had resumed their production activities to normalcy. Out of 550 businesses and more than 2,000 individual representatives surveyed, most said that Ho Chi Minh City was rated as the top locality in the country with a reopening and recovery rate at 3.6 points on a five-point scale, followed by Hanoi with 3.5 points. Hai Phong and Bac Ninh ranked third with 3.4 points.

According to Ms. Mary Tarnowka, Vietnamese authorities need to be more consistent in adjustments to coexist safely with Covid-19, facilitating the expansion plan of businesses already present in Vietnam, as well as attracting new sources of investment. AmCham Vietnam's member businesses are very optimistic about the prospect of reopening and economic recovery in Vietnam, with nearly 80 percent of respondents rating very positive or positive about the medium and long-term prospects in Vietnam and having planned or considering further investments.