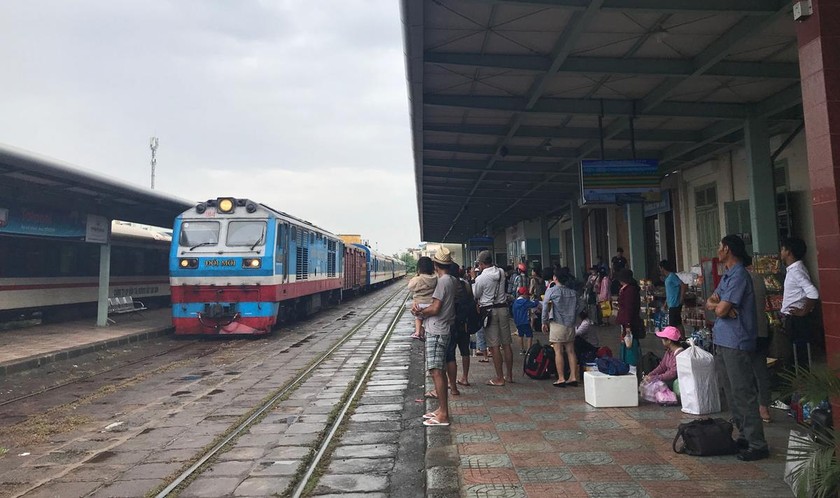 Once the Ho Chi Minh City-Can Tho railway line receives the much-needed investment and is fully operational by 2030, it will mark a hundred-year historical event in the region.
In an excerpt from his novel ‘Thay Thong ngon’ which was published in 1926, the famous Vietnamese writer Ho Bieu Chanh describes the chaotic scene at the bustling Tan An train station at sunset with people rushing with their luggage to catch the train to My Tho and others waiting to make the return journey back to Saigon.

Images of life surrounding the Saigon-My Tho railway line has been written in many novels by several other writers. This Southern region has been described in many literary works or studies of Mr. Vuong Hong Sen, researcher Nguyen Dinh Dau, and Son Nam. Mr. Nguyen Hien Le also chose to travel by train for the first time from Saigon to Tan An, now known as Long An, and then by waterway to the vast and untouched Dong Thap Muoi to write his masterpiece novel "Seven days in Dong Thap Muoi".

The Saigon-My Tho railway was the first train line between Vietnam and Indochina covering a length of more than 70 km. It was built in 1881 and became operational in 1885. In 1958 the old Saigon government discontinued this train line. In 73 years of its existence this train changed the mode of travel and carrying of freight in this region. It also was a part of the ethos of this area and became deeply embedded within the psyche of the people, providing an economical way of transport, and also becoming part of the emotional and cultural life of the Southern people.

According to Decision No. 1769/QD-TTG dated 19 October 2021, the Prime Minister approved the railway network master plan for the period of 2021 to 2030, with a vision for 2050. This will play an important role in the transport infrastructure system and is identified as one of three strategic breakthroughs that need to be prioritized for investment. Currently, resources have been arranged to start a number of new railway lines, in which priority is being given to the North-South high-speed railway routes connecting international gateway seaports and international airports, and a study is underway for the Ho Chi Minh City-Can Tho railway line.

The entire Mekong Delta transport system accounts for about 10% of the coverage in the country with more than 2,000 kilometers of national roads, about 4,800 kilometers of provincial roads, and about 73,000 kilometers of district roads and rural roads. For many years, this area has faced bottlenecks where traffic jams have remained a problem between Ho Chi Minh City and the Mekong Delta. Cargo is overloaded on roads and waterways, while there are not many flight routes connecting Ho Chi Minh City with the delta provinces. This region is still struggling with the flow of ships into the seaports, overloaded waterways, highways, land roads, and a complete absence of railways.

In 2013, the Minister of Transport approved the detailed plan of the Ho Chi Minh City-Can Tho Road for investment. The project was included in the Master Plan of the Mekong Delta region and the railway network plan for the period of 2021 to 2030, with a vision for 2050. This is one of nine new railway lines in the country that will be invested in the period until 2030. The Ho Chi Minh City-Can Tho route is a high-speed double track railway, with a 1,435 mm gauge and a length of 174 kilometers. It will start from An Binh station in Binh Duong province and pass through Ho Chi Minh City, Long An, Tien Giang, Vinh Long to reach Cai Rang station in Can Tho. Its total construction investment cost is expected to be about US$10 bln.

With a speed of 190 kilometers per hour, the Ho Chi Minh City-Can Tho railway line will shorten the travel time from Can Tho to Ho Chi Minh City to only 45 minutes. The route will run parallel to the Ho Chi Minh City-Trung Luong-My Thuan-Can Tho expressway, towards the periphery of existing urban areas. This will be an important traffic route to solve the problem of overloaded traffic for the Western provinces and Ho Chi Minh City, creating a connection with water, land, and air transport modes, and forming a complete transport network.

This new railway line is expected to promote strong economic and tourism development prospects as well as ease traffic congestion. The localities along the route will be able to exploit the land fund at the stations so as to have the capital for further socio-economic development.

This will be an environmentally friendly project which will create a new model for transportation development with clean energy using power plants for incinerating waste with solar power at stations along the route. It will connect two important regions of Ho Chi Minh City and Can Tho as well as open up space to develop urban and residential areas. This project will also pave the way for the building of more infrastructure such as industrial parks, schools, hospitals, and inter-regional centers for the transaction and distribution of goods.

The real effectiveness of the project depends on the appropriate investment method, which should not be a burden for public debt or put pressure on people and businesses by added fees from investors participating in Public-Private-Partnership (PPP) model. Therefore, it is essential to determine appropriate capital sources, investment phases, investor selection, investment methods, and integration with other inter-regional transport modes such as roads, waterways, maritime and air routes.

The development of the Ho Chi Minh City-Can Tho railway will certainly be challenging but with determination and proper planning it will be an extremely beneficial investment for the country.