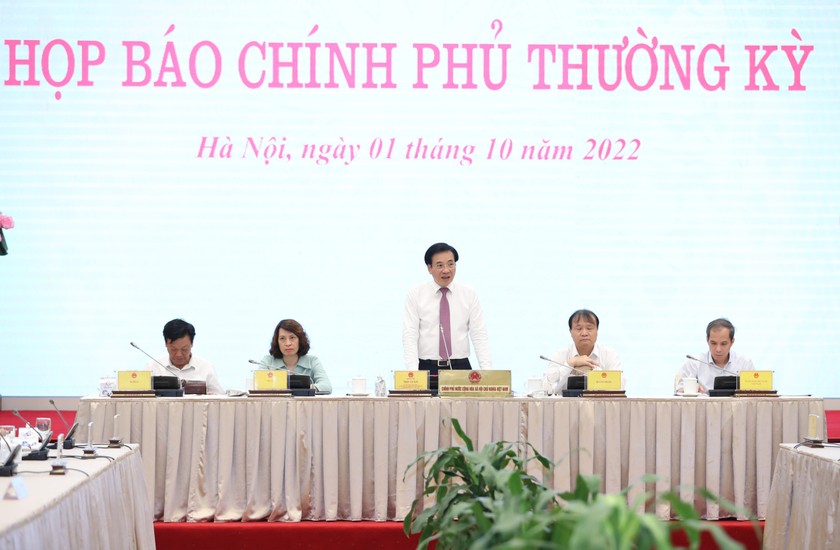 At the press brief ( Photo: SGGP)
Deputy Governor of the State Bank of Vietnam Doan Thai Son yesterday said that in the past nine months, the world economy had many fluctuations, especially commodity prices as well as inflation in many countries increased significantly highly. Moreover, in recent times, the US Federal Reserve (FED) has continuously raised interest rates to combat inflation.
In that context, in order to cope with inflation and reduce external impacts, central banks of various countries have sharply increased their operating interest rates. Since the beginning of 2022, central banks of countries decided to raise interest rates 262 times. The fight against inflation around the world is taking place very fiercely and the Central Banks of countries are very determined to carry out this task.
In Vietnam, the Government's overarching goal is to administer tools to contribute to controlling inflation, stabilizing the macro-economy as well as supporting economic recovery, especially stabilizing markets to ensure the safety of the operations of credit institutions. Over the past time, the management of the State Bank has also followed closely towards this goal. In the first eight months of 2022, the State Bank of Vietnam will keep the operating interest rates unchanged.
In September, the most recent adjustment of the FED, the State Bank increased some ceiling interest rates on deposits for commercial banks with the aim to control inflation, stabilize the macro-economy and ensure the maintenance of positive real interest rates for deposit rates in order to harmonize the interests of participants in the money market.
At the same time, this decision aims to create good conditions for commercial banks to continue to attract deposits and have financial sources for lending, supporting the economy in the coming time. After the State Bank of Vietnam (SBV) increased the operating interest rate to 1 percent, many commercial banks simultaneously increased deposit rates, making many people fret that this will mean an increase in lending rates.
SBV Deputy Governor Doan Thai Son stated that when adjusting this interest rate, SBV has also taken this into account. Therefore, in addition to the adjustment of ceiling interest rate, the State Bank increased the operating interest rate and the deposit rate ceiling, while keeping the lending rate ceiling unchanged. This shows that the SBV's management has aimed at stabilizing lending interest rates. Simultaneously, the SBV also mobilized credit institutions to continue reviewing to reduce operating costs and stabilize lending interest rates to support people and businesses in the coming time.
Also at the press conference, talking about the GDP growth scenario in 2023, Deputy Minister of Planning and Investment Tran Quoc Phuong said that in 2022, the GDP growth rate for the whole year is expected to be about 8 percent. According to him, the country’s economy in 2023 will face more difficulties because the global economy sees inflation pressures persist as growth slows, current Russia-Ukraine conflict continues leading to concerns about energy security, food security, and supply of goods besides the impact of non-traditional risk issues such as storms, floods, epidemics.
Given the above circumstances, the Ministry of Planning and Investment reported to the Government to choose a growth scenario of about 6.5 percent in 2023.