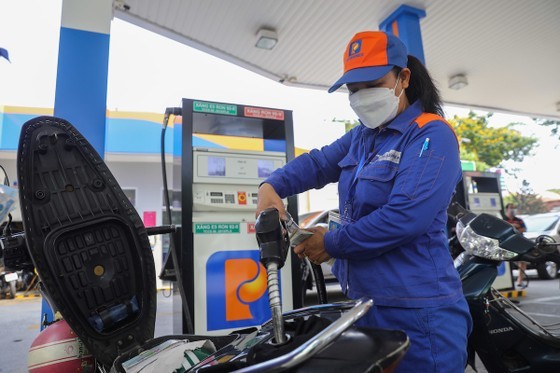 The high petrol prices have hindered economic recovery. (Photo: SGGP)
Thus, along with the solution to cut the environmental protection tax rate for gasoline, oil, and grease products to the floor level in the tax bracket until December 31, 2022, and the solution to reduce the MFN tax rate, the MoF has continued to put forward more tax cuts to help lower gasoline and oil prices.

Up to now, the MoF has proposed to reduce four types of taxes on this essential product.

According to the MoF, it is crucial to slash the MFN tax rate to 12 percent for gasoline to diversify petroleum supply to avoid being passive by depending on import sources from South Korea and the ASEAN only.

Besides, people and businesses will directly benefit from tax reductions on gasoline and oil products, thereby contributing to directly reducing consumers’ expenses as well as indirect costs from other consumer products.

Previously, because petrol and oil prices have continuously climbed and are currently at the highest level in history, a new price level has been formed, with many goods and services increasing by 5-10 percent and some even jumping by 25-30 percent.

The above developments have adversely affected people's lives, especially the underprivileged groups, poor, and low-income people. At the same time, it also makes it difficult for manufacturing enterprises to recover production after the Covid-19 pandemic.