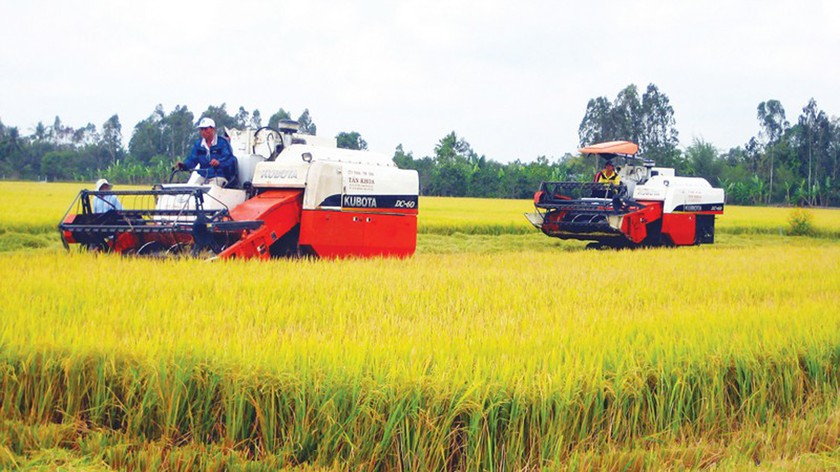 Farmers harvest rice in the Mekong Delta. (Photo: SGGP)
On the morning of August 7, Minister of Agriculture and Rural Development Le Minh Hoan chaired an online conference on the situation of rice production and consumption in the Mekong Delta after a special task force of the Ministry of Agriculture and Rural Development (MARD) proposed the Government to organize the purchase and reserve of rice for farmers.

According to a report at the conference on the progress of summer-autumn rice production this year in the Mekong Delta, farmers sowed 1,509,600 hectares of rice compared to a plan of 1,520,000 hectares, achieving 99.32 percent, down about 14,454 ha year-on-year.

It is expected that the harvest of the remaining rice area of 128,000 ha will end by September 15, and the rice output in the month is estimated at 651,000 tons.

The MARD informed that the Mekong Delta provinces had sowed 365,239 hectares of autumn-winter rice this year, reaching 53.32 percent of the plan, 15,557 hectares lower than the same period last year. The autumn-winter rice was sowed later than the same period last year due to the impact of the Covid-19 pandemic. Moreover, the delayed harvest of summer-autumn rice also affected the sowing progress of the autumn-winter rice crop. On the other hand, trucks carrying seeds cannot circulate through the provinces due to social distancing following Directive No.16, thus affecting the sowing progress.

The price of rice plummeted steeply

According to reports of the MARD and the Ministry of Industry and Trade, the prices of rice and other agricultural products in the South have fallen sharply, not because of supply and demand but severe disruption of the supply chain. Although import partners in other countries still need to import Vietnamese rice, enterprises cannot deliver goods.

Due to serious container congestion at Cat Lai Port in HCMC in the past 2-3 weeks, rice was delivered extremely slowly from warehouses to the port. Or it was transported to the port, but there were no stevedores to load it onto the vessels. Stevedores have to carry out three-on-site production, so they face difficulties with the conditions on board.

Saigon Newport is the main container port, but it has stopped receiving rice for export from July. It is unknown when the port can resume operation to normalcy. The number of containers jammed at Cat Lai port is high because only 50 percent of the direct staff are left.

Due to congestion in circulation, transportation, and export, according to the estimate of Vietnam Food and Foodstuff Association, the price of regular rice at fields in the Mekong Delta slid by an average of VND133 to only about VND5,000 per kg in the past week. Of which, IR50404 rice variety dropped by VND900-VND1,300 per kg compared to the same period last year.

According to the MARD, currently, the purchase of rice has decreased by 20-30 percent due to difficulties in exporting. Many enterprises cannot afford to implement three-on-site production, so they cannot maintain production. The rice drying system, milling plants, and boats could not operate due to the requirement to have a certificate of quick test for Covid-19.

To resolve the deadlock, the MARD proposed to prioritize vaccination for the workforce in the supply chain, including truck drivers, boat crew, factory workers, port workers, goods inspectors and fumigators, employees of export companies, who have to visit many places, such as ports, and officers of customs, C/O, and quarantine offices.

Besides, the Government should have policies to support taxes and fees for businesses during the pandemic because, at present, enterprises have to pay for the costs of rapid and PCR testing, food, and accommodation for live-in workers.

"New regulations of the authorities must follow the roadmap, avoid suddenness because enterprises cannot adopt promptly, especially shipments on the way to the port," the MARD proposed.


According to the Department of Import and Export under the MoIT, rice exports in the first seven months of this year reached nearly 3.6 million tons, with a value of roughly US$1.94 billion, down 10.6 percent in volume and 0.6 percent in value compared to the same period last year.