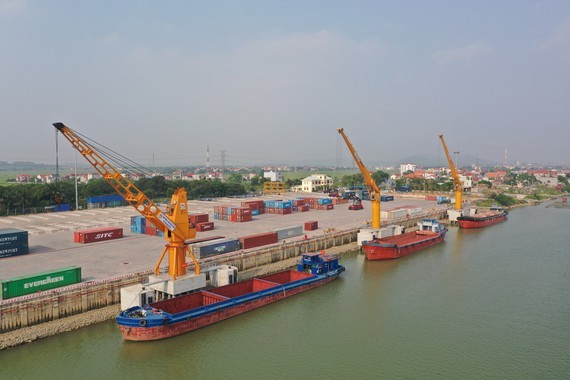 The list of Vietnamese inland ports currently has 10 ports, including inland ports Hai Linh and Km3+4 Mong Cai in the Northern Province of Quang Ninh, Hai Phong New Port and Hoang Thanh in the Northern City of Hai Phong, Dinh Vu in the Central Province of Quang Binh, Long Bien in Hanoi, Tan Cang in the Northern Province of Ha Nam, Phuc Loc in the Northern Province of Ninh Binh, Nhon Trach New Port in the Southern Province of Dong Nai and Que Vo in the Northern Province Bac Ninh.
Thus, compared to the List of Vietnam's inland ports announced in 2020, the Vietnamese inland port system is supplemented with Que Vo. This is an inland port located downstream of the Duong River, adjacent to National Highway 18, located near industrial parks in Bac Ninh and Bac Giang.
Que Vo dry port is a destination port, a centralized inspection center, container gathering both cargo and empty, and a customs clearance point for import and export goods of Bac Ninh, Bac Giang, and neighboring provinces. The operation of  Que Vo inland port and other river ports will be associated with the operation of transporting containers by a barge on the inland waterways of Cam river - Kinh Thay river - Duong river.
According to the Ministry of Transport, being considered an ‘extended arm’, the dry port will help seaports increase the speed of cargo release. In particular, the inland port must have at least two modes of transport to facilitate multimodal transport or directly connect with a high-capacity mode of transport.
The inland port must be designed and planned with the total area of subdivisions to ensure the functions such as receiving/sending, loading/unloading goods, consolidating odd goods for goods with many owners in the same container, gathering container goods and other goods for transportation to a seaport or another place as prescribed, temporary storage of import and export goods and containers and inspect and carry out customs procedures for imported and exported goods.