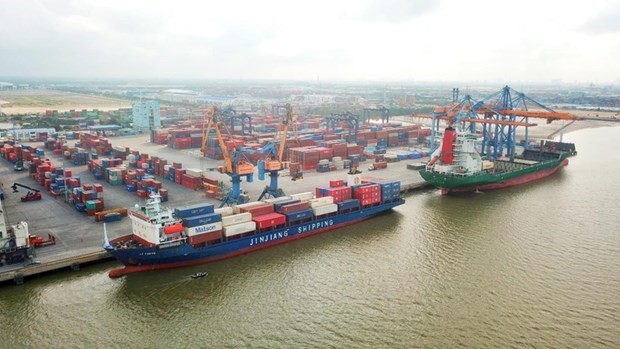 Throughput of Vietnam's seaports is estimated at more than 304 million tonnes during January-May (Photo: VNA)
Speaking at the ministry’s online meeting, Acting Director of the Vietnam Maritime Administration (Vinamarine) Nguyen Dinh Viet said that in the first five months of this year, the throughput of Vietnam's seaports is estimated at more than 304 million tonnes, up 1 percent year-on-year. The container throughput also reported a year-on-year rise of 1 percent to 10.5 million TEUs.
Minister The requested the Vinamarine to pay more attention to import and export activities at seaports, and to have a plan to check and work with businesses to grasp the situation of transportation costs so as not to let prices escalate to reduce the quantity of goods, and affect the trading process and economic development.
Noting that the coming rainy season can increase traffic safety risks, he asked the Transportation Department to seek suitable measures to repair infrastructure affected by the weather to ensure safe and smooth transport.
As the number of fatalities in traffic accidents in the five months saw a modest decrease, at only 1 percent, the minister stressed the need to take more drastic and concerted measures to significantly bring down the number of traffic accidents and the casualty.
Minister The also requested stricter punishment of overloading vehicles.