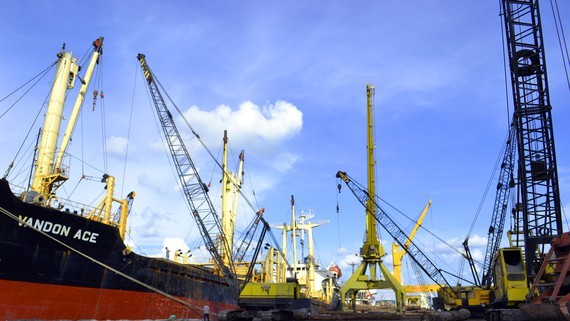 Cai Cui Port, one of the largest ports in the Mekong Delta. (Photo: SGGP)
Deadly bottlenecks

“Currently, the total number of expressways in the Mekong Delta is only about 40km, accounting for 3.4 percent, and is among the lowest in the country. Meanwhile, inland waterway transport plays a key role, but there is a serious lack of investment. The investment budget for inland waterways decreased from 2-3 percent in the 2011-2015 period. The total investment budget for transportation declined to 1.2 percent in the 2016-2020 period,” said Mr. Pham Minh Hai, Transport Development and Strategy Institute under the Ministry of Transport.

The Mekong Delta is a key economic region, contributing about 90 percent of rice production, 65 percent of seafood production, and 70 percent of fruit production for the country's exports. The demand for transporting export goods of the Mekong Delta is up to tens of millions of tons annually. However, there is a lack of seaports here, especially deep-water ports for container ships. Meanwhile, the logistics supply chain is scattered and on a small scale, with a shortage of logistics centers to fully meet the export demand of agricultural products. The insufficiency of seaport systems in the Mekong Delta, especially deep-water ports, along with storage costs and increased waiting time has caused many difficulties for enterprises. Therefore, agricultural products are held back by the logistics burden, hindering development.

In 2021, transportation was difficult during the period of social distancing to prevent the Covid-19 pandemic, only Hanh Nguyen Logistics Center, located in Hau Giang Province, was the bright spot when its cold storage system, with a capacity of 14,000 tons, promoted its function of receiving products, such as frozen shrimp, frozen seafood, frozen juice, frozen fruit, fresh fruit, and fresh vegetable.

According to Mr. Pham Minh Hai, besides the lowest expressway rate in the country, most of the horizontal arterial roads in the Mekong Delta are narrow, and the intra-regional arteries have not been invested yet; the system of internal roads, including provincial and district roads, with about 60-70 percent of the routes have not met the required intensity and standard of access roads at the planning level. The road system connecting to the border gates has not been completed and synchronous to meet the needs of international passenger and freight transport. The connection of road traffic with the system of seaports and inland waterway ports is still limited.

Mr. Pham Tien Hoai, General Director of Hanh Nguyen Logistics Center, said that the weaknesses in traffic and channels to the seaports make the logistics costs of Vietnamese agricultural products extremely high, losing the advantage compared to those of China, Thailand, Indonesia, and the Philippines. Logistics cost accounts for 30 percent of the product cost while that of Thailand is 12.5 percent, and the world 14 percent.

Channeling and investing in logistics infrastructure

The specific goods of the Mekong Delta are agricultural products. Meanwhile, currently, there are no seaports to receive large ships of 30,000 to 50,000 tons, and seaports are regional gateway ports. Most of the goods have to be transported to the seaport area in the Southeast region. At the same time, there have not been many large-scale logistics centers in the region to serve import and export goods.

Mr. Nguyen Phuong Lam, Director of Vietnam Chamber of Commerce and Industry - Can Tho Branch, said that the Mekong Delta still lacks key logistics centers and satellite systems, empty container yards, warehouse systems at ports, and qualified food safety and inspection service and irradiation centers. Therefore, most import and export goods have to be transshipped through Cat Lai Port in HCMC and Cai Mep - Thi Vai Port in Ba Ria - Vung Tau Province, costing a lot of time and money, affecting the competitiveness of goods in the market.

Mr. Vo Thanh Phong, General Director of Hau Giang Maritime Services Company Limited (VIMC Hau Giang), suggested that the Government should continue to improve and maintain the Quan Chanh Bo Canal to ensure large ships into the ports on the Hau River. This is a key issue for the development of the logistics service industry in the Mekong Delta. At the same time, the authority should expand and dredge Cho Gao Canal in Tien Giang Province on the national waterway route, the lifeline connecting HCMC and Long An with the Mekong Delta provinces.

Mr. Le Tien Cong, Deputy General Director of Can Tho Port Joint Stock Company, acknowledged that the Mekong Delta wishes to receive as many containers as HCMC. At the same time, there should be yards for storing and repairing containers, refrigerated containers, and dry containers. “Currently, to send a container abroad, we have to move an empty container from HCMC, then pack goods, and export. If there are empty containers available here, export of goods will be faster at lower costs,” he said.

Mr. Le Tien Cong analyzed that the Mekong Delta region has a diverse system of canals and rivers, convenient for transporting goods for processing and export. However, for this waterway system to be effective, localities need to regularly dredge important waterways. Currently, rivers have different depths, causing transportation to go through many stages of loading and unloading from small vehicles of 20-30 tons up to 100-200 tons or 1,000-2,000 tons. These stages make shipping costs increase extremely high.

According to the Transport Development and Strategy Institute, it is necessary to develop a funding mechanism for regional infrastructure and issue a mechanism to attract investment from the non-budget area for the development of the Mekong Delta. In the 2022-2025 period, Phase 2 of the channel project for large ships into the Hau River should be deployed to synchronize and complete for the 20,000-ton ships to reduce their load into the harbor areas deep in the Hau River of the Can Tho Seaport.