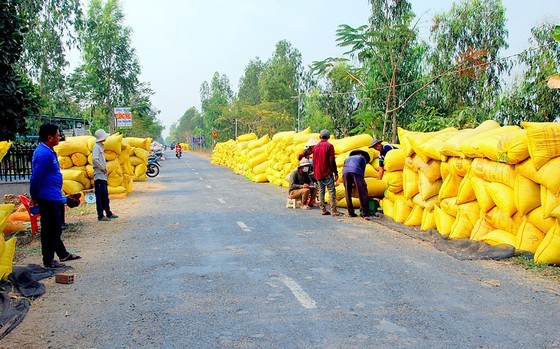 According to the Ministry of Agriculture and Rural Development (MARD), this winter-spring rice crop in the Mekong Delta, rice output is estimated at 10.7 million tons, an increase of 144,000 tons of rice compared to the last winter-spring rice crop. Rice yield is estimated at over 7 tons per hectare, up 0.2 tons per hectare, the highest in the past five years. Currently, rice prices have slightly slid by about VND50-VND100 per kilogram, ranging from VND6,000 to VND7,500 per kilogram.

Mr. Le Thanh Tung, Deputy Director of Department of Crop Production, said that Mekong Delta farmers had a profit of over 45 percent of the selling price. While Mr. Nguyen Ngoc He, Vice Chairman of the People's Committee of Can Tho City, said that in the winter-spring rice crop of 2021, the rice yield of Can Tho farmers reached 7.6 tons per hectare. This is the year that the province produces rice best, with the highest yield and the profit of farmers over 50 percent.

Rice yields are high and rice prices are also at an acceptable level in the context of market difficulties due to the Covid-19 pandemic, along with the impacts of extreme weather. The current situation is far different from that five years ago. At that time, Professor-Dr. Vo Tong Xuan recalled, farmers produced rice spontaneously. If they wanted to grow any rice variety, they would grow it. If they wanted to adopt any technology, they would use it. Farmers grew rice without knowing who would buy rice and for how much. So each farmer grew each rice variety and they used the technique they wanted. As a result, in the same rice field, there were dozens of rice varieties and dozens of farming techniques, causing the spread of pests and diseases.

Prof.-Dr. Vo Tong Xuan also said that the functional department and enterprises need to put more effort into rice production, not to leave farmers to produce rice alone, but they must be responsible for organizing production. Each product put on the market needs to be produced in the value chain, strictly comply with the GAP process that links farmers, the State, the scientists, and entrepreneurs. The core is that the consumption enterprises are associated with agricultural cooperatives. It is the basis for Vietnamese rice to continue to reach farther.

The reality of rice production and trading, as mentioned above, in the Mekong Delta has changed significantly in recent years. Accordingly, the ST rice lines, namely ST24 and ST25 rice varieties, which have emerged and gone like hot cakes in both domestic and export markets, are a typical example of changes of farmers in choosing good varieties for production to sell to enterprises. 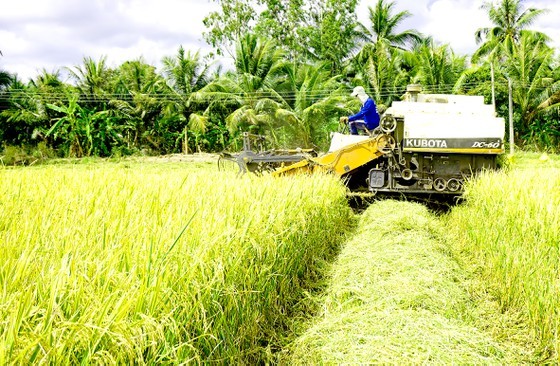 Mekong Delta farmers harvest winter-spring rice with the joy of having a good harvest and high rice prices. (Photo: SGGP)
The Department of Crop Production explained that the percentage of farmers using high-quality rice varieties to supply the high-end rice segment was on the increase. The group of fragrant and specialty rice, including Jasmine 85, ST, RVT, Tai Nguyen, and Nang Hoa 9, accounted for 22 percent of the total growing area, up 0.2 percent; the group of high-quality rice varieties, including OM5451, Dai Thom 8, Huong Chau 6, OM18, OM9577, OM9582, OM4900, OM7347, and OM6976, accounted for 55.5 percent, up 1 percent compared to that in the last winter-spring rice crop. Especially, the rate of farmers using certified rice varieties was approximately 78.57 percent; farmer-managed seed systems and exchange was about 19.65 percent, accounting for 25 percent of the supplied amount of certified seeds; the rate of farmers using original rice seeds was about 5 percent.

Mr. Le Thanh Tung said that the Department of Crop Production has proposed and oriented the structure of rice varieties according to ecological subregions in the Mekong Delta following the proposal of the Vietnam Food Association (VFA). In general, the rate of farmers using fragrant and high-quality rice varieties has increased, meeting the demand of rice export markets.

According to the VFA, because the weather was unfavorable and food production dropped in many countries, the demand for rice imports will increase in 2021. The European market is forecasted to be more vibrant when the EU-Vietnam Free Trade Agreement (EVFTA) has come into effect, and Vietnam is an important rice trading partner.

Some rice exporters in the Mekong Delta said that the conversion and reduction of a part of rice-growing areas and the concentration on the segment of high-quality and fragrant rice have brought many advantages. Thereby, it helps reduce pressure to seek the consumption market, at the same time improve income for rice farmers. The quality of Vietnamese rice has been improved, creating many advantages, especially the door to the European market is wider and wider. Currently, the EU market has a demand to import about 2.1 million-2.3 million tons of rice per year, but currently, Vietnam only exports about 80,000 tons of rice under the EVFTA.

According to the MARD, in the first three months of this year, enterprises had exported 1.1 million tons of rice, worth US$606 million, down 30.4 percent in volume and 17.4 percent in value, respectively, compared to the same period last year. Rice exports decreased compared to the same period last year because, from the beginning of this year, enterprises could not rent containers. Some enterprises managed to rent containers, but the number was very limited. Meanwhile, the shipping costs and rents of empty containers increased highly, affecting the import and export activities, including rice.