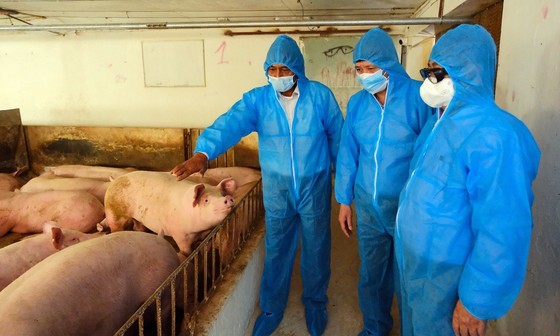 According to the Ministry of Agriculture and Rural Development, currently, a large number of workers in some localities have not returned to big cities to work, schools are still closed, and restaurants receive a limited number of guests, so the consumption of food remains low. This situation led to a sharp drop in the price of pigs. The live pork price was at VND70,000-VND75,000 per kg in March and April, but from the beginning of October until now, it has fluctuated around VND35,000-VND45,000 per kg, even below VND35,000 per kg in some localities for overaged pigs, weighing from 130 kg to 160 kg.

In the past 2-3 days, pork prices in some places have increased by VND5,000-VND6,000 per kg as consumer demand tends to climb, and travel becomes more convenient after the pandemic has been gradually controlled. According to the MARD, due to social distancing, the demand for pork in Ho Chi Minh City and Hanoi has fallen by 40-50 percent compared to before the pandemic. Currently, HCMC needs about 1,600 tons of meat of all kinds and 2.2 million-2.5 million poultry eggs every day. Meanwhile, Hanoi consumes more than 820 tons of meat and more than 4 million eggs.

While the price of live pork decreased, the price of raw materials and animal feed increased by 16-36 percent over the same period. This causes producers to lack capital to maintain production because of a backlog of unsalable products. Difficult circulation leads to overaged animals and overstocking situation of about 30 percent of pig production, or about 1.5 million-2 million pigs. Some pig-farming households and establishments have had to stop production and business activities because of insufficient resources for reinvestment and difficult access to new loans of credit institutions.

After the field trip, Minister of Agriculture and Rural Development Le Minh Hoan said that amid the context of increasing raw material prices, making it difficult for reinvestment, farmers in some provinces have made the most of agricultural waste to replace imported animal feed, reducing pressure on input costs. The Minister of Agriculture and Rural Development said that many farmers had also bought raw materials together at wholesale prices to reduce costs. The MARD encourages members of livestock cooperatives to summarize data. Thereby, agencies and businesses can accurately update weekly and monthly information on market demand and supply capacity. Thereby, it is possible to match supply and demand information accurately to reduce risks for the market.

The MARD has promptly reported the difficulties and problems of the livestock industry to the Prime Minister and put forward solutions to direct production, circulation, and consumption. Nevertheless, to ensure stable growth of livestock, in the coming time, the MARD will strengthen the connection of consumption, supporting cooperatives, cooperative groups, and livestock farms to expand the market and provide products directly through the existing distribution system, reducing intermediaries. It also suggested that livestock-farming households increase the use of locally available feed ingredients, such as bran, corn, and cassava, to lessen dependence on industrial animal feed. In the long term, the MARD will research and propose the planning of raw material growing areas for the animal feed industry; create conditions for organizations and individuals to accumulate agricultural land into large-scale fields, apply science and technology, and synchronously mechanize to produce corn, soybean, and biomass corn for animal feed production in Vietnam. In the context of a decrease in market demand, the MARD suggested that farmers quickly apply the biosafety farming model to avoid additional risks of disease.

To promote demand, the MARD proposes and creates favorable conditions for enterprises that have invested in high-tech animal livestock in the chain of breeding stock, feed, production, slaughter, processing, and consumption, such as Masan, Dabaco, etc. CP, Japfa, and Deuh, to boost exports.

The ministry has also proposed that the Government has a support package to restore production for farmers in localities under social distancing who face difficulties because of the Covid-19 pandemic; take measures to reduce import tax on animal feed ingredients and input materials; support credit and interest rates to reinvest in livestock farming to limit the risk of food shortages in the last months of 2021 and the upcoming Lunar New Year; at the same time, reduce corporate tax in 2021 and six months of 2022; lower environmental protection tax; extend the deadline for value-added tax payment and reduce land rent for the years 2021 and 2022 for affected livestock establishments; adopt a land policy for livestock, invest in infrastructure for slaughtering and food processing.

At the recent meeting, Deputy Prime Minister Le Van Thanh directed that it is necessary to have a solution to support farmers who have a massive backlog of pigs. The Ministry of Finance was assigned to research and draw financial support solutions. The Ministry of Industry and Trade was instructed to urgently organize meetings with localities to restore the operation of wholesale and traditional markets and open price-stabilized stores to promote consumption. The Deputy Prime Minister also requested to organize inspection and check to clarify the costs of each stage in the value chain, investigate the difference in selling prices between the price of live pork and pork selling price at markets and supermarkets, and review the export and import activities of pork to promptly handle violations, if any.