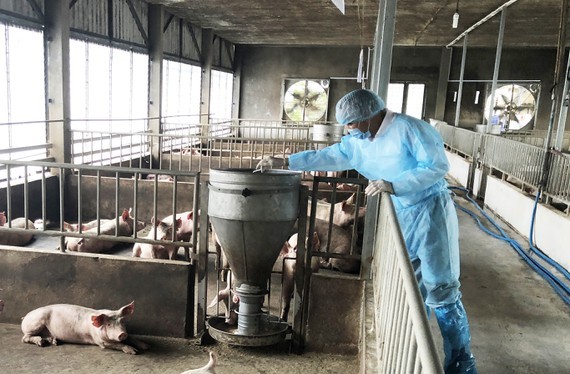 These days, many pig and poultry farms in the suburbs of Hanoi were found to close and grass has grown in these places. Inhabitant Nguyen Van Truyen in Dai Thanh commune in Quoc Oai District said that his family had rented land for a chicken farm since 2007 but because the price of chickens has dropped too low in the past two years, they had no choice but temporarily switched to raising 4,000 swans to reduce feed costs.

Elsewhere in Quoc Oai District’s Duong Coc village, Nguyen Van Dai, the owner of a farm of 15,000 white-feathered chickens and egg-laying chickens moaned during the social distancing, a red chicken egg was sold at VND2,500, but a few days ago it decreased to only VND1,500 while the bad type was only VND1,100.
On his farm, more than 7,000 laying hens reaching their peak egg production and more than 7,000 other chickens are starting egg production presently. But, the current highest price of an egg is VND1,500, while the production cost of an egg is estimated around VND1,800; therefore, the more eggs his chickens lay, the more loss he suffers ,approximately loss is about VND4-5 million a day.
Worse, farmer Dai said that not only the price of eggs but also the price of white-feathered chickens in the North region is also rapidly decreasing from VND50,000-VND60,000 per kg to only VND35,000-VND36,000 per kg.
When being asked about the investment policy to restore livestock and re-herd for the last months of the year and the Lunar New Year, poultry farmer Nguyen Nha Phu in Duong Coc village said that he was broke.
In April, his whole farm of 7,500 chickens was infected with H5N1 disease, so they died all; subsequently, he suffered a loss of VND1.1 billion. So far he has not received any financial support from the veterinary agency of Quoc Oai district and Hanoi city. He is waiting for financial assistance to re-raise the livestock.
According to many ranchers, while supply is exceeding demand, the Ministry of Agriculture and Rural Development and the Ministry of Industry and Trade are now allowing massive imports of cattle and poultry meat from abroad for consumption in the last few months and the Lunar New Year 2022. During the fourth wave of the Covid-19 outbreak, farmers couldn’t consume products due to difficult transportation.
Statistically, about 35-40 percent of farm owners have abandoned their farms with a wait-to-see attitude.
According to Deputy Director of the Department of Livestock Production under the Ministry of Agriculture and Rural Development Nguyen Van Trong, the price of pigs has dropped sharply in many places, especially in the North where has dropped to VND33,000-VND35,000 per kg.
In fact, production is still normal, but many workers have left big cities to return to their hometown; plus, restaurants, popular eateries, schools, and collective kitchens have not yet resumed normal operation; accordingly, the consumer demand for livestock and poultry meat has decreased dramatically.
Mr. Trong also said that although pig herd growth in the first nine months of this year still increased by 5 percent, with the current sharp drop in pig prices, if farmers continue to sell off to cut loss, the risk of food shortage at the end of the year will be seen.
Deputy Minister of Agriculture and Rural Development Phung Duc Tien revealed that while food prices are cheap, feed prices have been rising too high, pushing farmers into much more difficulties. The Ministry of Agriculture and Rural Development has sent its report to the Government and relevant ministries proposing to remove the bottlenecks in credit capital for breeders, reduce logistics costs, and reduce the price of animal feed.