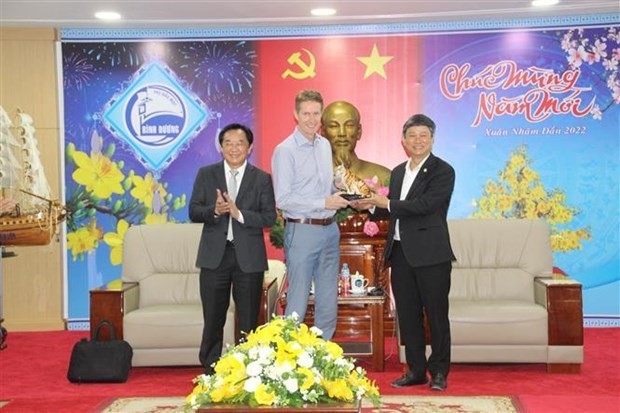 Binh Duong leaders have a working session with LEGO Vice President Preben Elnef (centre) on January 17 (Photo: VNA)
Elnef spoke highly of the dynamic and professional investment climate in Binh Duong, an industrial hub in southern Vietnam, noting that LEGO is also stepping up personnel recruitment in Vietnam to serve its project.
For his part, Chairman of the provincial People’s Committee Vo Van Minh pledged the best possible conditions for this project to be carried out successfully and fruitfully.
According to the LEGO Group, work on the factory in Binh Duong is scheduled to begin in 2022, and it will become operational in 2024. The new facility will cover 44ha of land and have total investment of more than US$1 billion, making it the largest Danish-invested project in Vietnam.
The sixth LEGO factory in the world, also the second in Asia, is expected to help this firm expand its global supply chain, thereby flexibly and swiftly adapting to changes in consumption demand in each region, shortening the supply chain, and reducing environmental impact by long-haul transportation.
The plant is hoped to generate 4,000 jobs in the next 15 years.
At a recent investment promotion event, Chairman of the European Chamber of Commerce in Vietnam (EuroCham) Alain Cany described the LEGO project as a demonstration of Binh Duong as a dynamic, reformed, favourable, safe, and attractive destination for European investors.