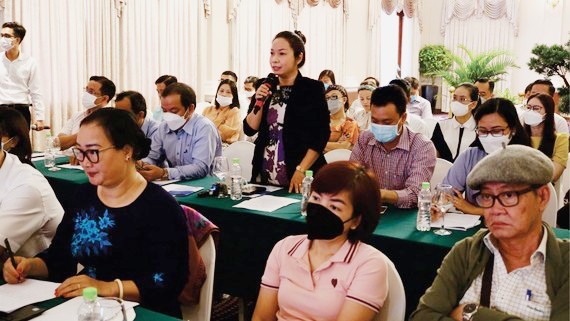 The scene of the dialogue between enterprises and the HCMC Department of Natural Resources and Environment. (Photo: SGGP)
Many lingering problems

Ms. Nguyen Thanh Thao, the representative of Saigon Culture Corporation, said that before 2010, her company rented three land plots and was granted land-use rights certificates. In 2010, the company changed into a one-member limited liability company, but the land lease contract signed in 2009 was under the name of Saigon Culture Corporation. By 2021, when dealing with land rent reduction and land lease extension, tax authorities found that the company’s name on the lease contract and the seal did not match. Although the company has applied for a name change, it has not been resolved, affecting the interests of the company.

Meanwhile, Ben Thanh Corporation - One Member Limited Liability Company is facing difficulties because it has to pay the land rent for the inaccurate land area. According to this enterprise, the District 1 Import-Export and Service Company, the predecessor of Ben Thanh Corporation, was leased land by the People's Committee of HCMC at Hamlet 4, Tan Thoi Hiep Ward, District 12, following Decision No.5312/QD-UB-QLDT dated June 29, 1997.

Then, the company signed contract No.1954/HD-TD on November 1, 1997, with the Department of Land Administration of HCMC, with a lease term of five years for the land area of 13,650 square meters until December 31, 2001. Because many households complained about the content related to the above land, the People's Committee of HCMC issued Decision No.1010/QD-UBND dated March 10, 2015, to adjust the rental area to 8,009.1 square meters. Currently, Ben Thanh Corporation still has to pay land rent for the land area of 13,650 square meters, although the actual area is only 8,009.1 square meters.

The Saigon Trade Corporation (Satra) also reflected that the company was approved by the People's Committee of HCMC to become an investor to implement the project of a trade center, offices, services, and hotels at the location of the Saigon Tax Trade Center (2010). The land consists of two parts: the area belonged to the Saigon Tax Trade Center, which the People's Committee of HCMC decided to assign the management company and hand over fixed assets to convert into a one-member limited liability company, and the area under the State management and private ownership. Satra Company has performed some works in the preparation stage for investment, such as compensation and resettlement, planning, and conservation, following the direction of the municipal People's Committee. Up to now, the company has neither been assigned as a project investor nor been allocated land to implement the project.

According to enterprises, many problems have been proposed to be removed, but the response and resolution are slow, causing them to always face a dilemma. Therefore, enterprises expect the authorities to direct and handle difficulties soon so that enterprises can deploy their investment plans.

With many years of experience as a surveyor, Ms. Truong Thi Huong Giang, a surveyor of Liksin Company, has raised several issues related to land management regulations that make enterprises, especially State-owned enterprises, struggle. Specifically, the land lease does not match the actual area; it is very difficult to apply for an adjustment to the right area for the land lease contract; the land rent has been accumulated for many years, sometimes for decades. Therefore, if it has to be paid at the current appraisal price, sometimes the land rent is even larger than the capital size of the company.

Some enterprises had paid an advance to receive the land transfer but did not receive it, and their request to refund the money was not resolved either. These inadequacies come from overlapping regulations on land management, requiring the intervention and determination of not only the Department Of Natural Resources and Environment but also the departments of finance, tax, and planning to resolve them together.

Mr. Nguyen Toan Thang, Director of the Department of Natural Resources and Environment of HCMC, acknowledged that legal regulations remain overlapping, causing difficulties for law enforcement agencies and businesses. Over the past time, the Department of Natural Resources and Environment and other departments and agencies have always accompanied and helped enterprises manage and use land legally and effectively. According to Mr. Nguyen Toan Thang, the Department of Natural Resources and Environment will receive documents related to the issues raised by enterprises and then have a complete and accurate answer, in which, it will clearly define the responsibilities of both enterprises and State management agencies for each backlog case proposed by enterprises. At the same time, the department will also hold a meeting to improve its shortcomings and advise the municipal People's Committee on solutions.