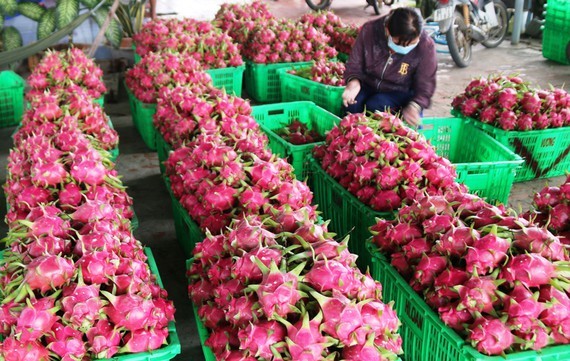 While the National Assembly was meeting to discuss the support package, thousands of container trucks carrying fruit have been stuck at the Northern border gates from the beginning of December 2021 to now. Some containers of fruits were dumped, and some had to return to the domestic market for rescue. According to the Ministry of Agriculture and Rural Development (MARD), by the 2022 Lunar New Year, nearly 1 million tons of agricultural products, such as jackfruit, mango, pineapple, and dragon fruit, will be ready for harvest and need consuming. Most of these fruits are mainly exported to the Chinese market. However, because China has been implementing the Zero Covid policy, the import of dragon fruits will be halted until the 24th of the twelfth month in the lunar calendar. Meanwhile, other fruits will stop importing 14 days before Tet and 14 days after Tet.

Mr. Huynh Canh, Vice Chairman of Binh Thuan Dragon Fruit Association, informed that local dragon fruits are exported to China by land and sea. As soon as China announced to suspend purchasing through the land border gates, the consumption of dragon fruits was seriously affected. Exporting by sea is not easy because there are not enough containers, so the shipping rate has been pushed up to nearly VND200 million per container. Earlier at the meeting on rescuing agricultural products, a representative of Long An Province said that the province had 10,000 hectares of dragon fruits ready for harvest, with an output of 20,000 tons. Because traders refused to buy dragon fruits, Long An Province has mobilized the entire cold storage system to store them but can only handle 5,400 tons.

Although the export of the entire agricultural sector in 2021 hit a record, not all agricultural products enjoy good results, for instance, fruits. Farmers who lose income from this fruit crop will have a sad Tet holiday. According to the director of a large investment company in the agricultural sector, the main reason for the precarious state of the agricultural sector is the serious shortage of warehouse systems, cold storage facilities, logistics centers, and processing factories in the production areas, as well as at the border gates.

According to Deputy Minister of Agriculture and Rural Development Tran Thanh Nam, building storage warehouses, cold storage, and bonded warehouse for agricultural products is an urgent requirement at present, as well as in the long term. In large fruit-growing areas, such as Binh Thuan and Long An provinces, the fruit output is up to 1.4 million tons per year, but so far, cold storage has not met the demand.

In fact, for many years, agricultural products are stuck at the border gates every harvest season, instead of when importing countries strictly apply the Zero Covid policy as currently. Therefore, to make a long-term solution for the coming years, the MARD has developed a project on the investment in a specialized cold storage system to preserve agricultural products, establish modern logistics centers, and integrate animal and plant quarantine activities and customs clearance procedures at the border gates. The project has been submitted to the Government. At first, Quang Ninh Province proposes to pilot the project at Mong Cai Border Gate.

According to Deputy Minister of Agriculture and Rural Development Tran Thanh Nam, it is necessary to have a support package for the agricultural sector. However, agriculture does not stand alone but in the general category of support of VND110 trillion for the recovery of enterprises, cooperatives, and business households, according to the category of sectors expected to be distributed under the proposed support package. In fact, agricultural cooperatives only account for a small part compared to the rate of about 63 percent engaged in agriculture. Thus, the stimulus package that only supports agriculture through cooperatives is insignificant. Without a separate and large enough support package for agriculture, the current shortcomings of “bumper harvest, low prices” and "agricultural product rescue" will not be resolved immediately.