Now, just a few people from other places came to ask to buy land in Tan Loi Commune in Hon Quan District. The owner of a beverage shop said that more than 2 months ago, 1,000 square meters of agricultural land cost about VND200 million. The rumors of the proposed airport have pushed up the land lot to billions of Vietnam dong. The airport planning was also rejected by the local authority. 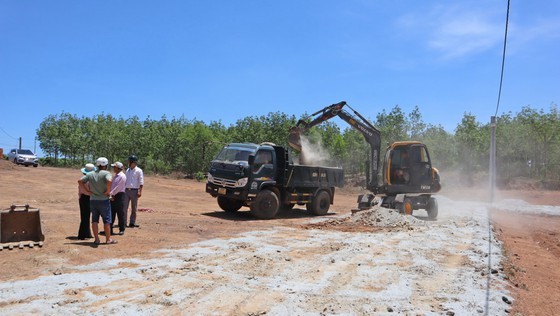 An investor from the Southern Province of Binh Duong regretted spending VND50 billion (US$2,168,566) buying lots of agricultural lands in communes An Khuong and Tan Loi which now cost VND15 billion.
Chairman of Lai Hung Commune People's Committee Banh Quoc Trung said when a "land fever" occurred in the area, he had to sign more than 100 property transactions a day, more than 3 times higher than before. Realizing potential risks for many people falling into the trap set by groups of bad guys, the local administration has increased information of the land as well as stopped transactions of property. Moreover, the local government asked police forces to identify a group of more than 10 people creating virtual land prices.
Chau Duc District in Ba Ria - Vung Tau Province has also seen a land fever. Land prices increased here from the news that a large corporation would invest in a project of hundreds of hectares in Binh Ba commune. The land price of rubber forests and cashew orchards in Binh Ba - Da Bac route jumped to VND 3-4 million per square meter, two or three times higher than normal.
In Dong Phu District in Binh Phuoc Province, land prices in Thach Mang hamlet area continued to increase when a connection road with Long Thanh airport has been reportedly proposed to open by the Prime Minister lately. Each meter of land along both sides of DT753 road, going from Dong Xoai city to Ma bridge, costs VND130-VND150 million. Specifically, a 2-hectares rubber garden was about VND1 billion, but it is being inflated to VND28-VND30 billion.
In Gia Canh upland commune in Dong Nai Province, rumor has it that an industrial park is going to be opened which has created a "land fever". Talking to a reporter from the SGGP Newspaper, Vice Chairman of Dinh Quan District People's Committee Ngo Tan Tai affirmed that the district does not have any Gia Canh industrial parks that are about to be deployed.
According to the Land Registration Office of Ba Ria - Vung Tau Province, in the first quarter of 2021, the office received 47,194 land documents, an increase of 29.72 percent over the same period in 2020. The number of land documents increased sharply largely due to the virtual "land fever" that caused the transfer transaction to increase. From Tet holiday ( the Lunar New Year) to the end of April, the price of land in Xuyen Moc, Dat Do, Phu My and Vung Tau City increased 2-3 times over the same period. However, by the beginning of May 2021, land prices dropped sharply, transactions were frozen.