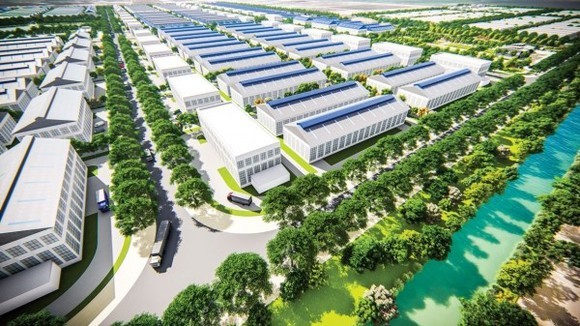 More industrial parks were set up in Vietnam in the first five months of the year. Local developers are seeking to attract big investors. (Photo: SGGP)
According to CBRE, the industrial realty sector tended to increase just before the pandemic as Vietnam was said to be a promising destination for the wave of production relocation from China, with interest from many large corporations.

The research firm said industrial real estate would be the "backbone" for any developing manufacturing economy, and Vietnam was no exception.

Seeing the potential, many localities promoted the establishment and investment of infrastructure for industrial parks in the area. According to the latest report of the Ministry of Planning and Investment (MPI), as of May 2021, the country has 394 industrial parks established with a total natural land area of 121,900 ha. Of which, 286 industrial parks are in operation with an occupancy rate of 71.8 percent, creating 3.78 million direct jobs in the country.

Tran Dinh Thien, former director of the Central Institute for Economic Management, said: "Localities have correctly identified opportunities and that there will be investment booms in Viet Nam as they see the benefit of many free trade agreements.”

As the flow of investment in the world was shifting to other parts including Vietnam, IP developers and leaders of the localities understood they can promote the attraction of investment with their IPs.

Though Thien appreciated the new establishment of IPs in Vietnam, he said such work must go in hand in hand with many other factors in order to be truly effective in attracting investment.

He told local media: "IP developers should not be too impatient when waiting for good investors as low-quality investors can help fill the parks but it may not necessarily be a good thing for the future development."

Thien said an IP with electricity, a fence or a nearby road was not enough, adding: “Big corporations need more for their IPs such as a national infrastructure connection as well as policies supporting their work such as human resources and environment-friendly facilities.”

"Otherwise, Vietnam will spend a lot of time living with low-level projects and environmental pollution.”

Le Thanh Van, a member of the Finance and Budget Committee of the National Assembly, said: "The IP model of Vietnam is outdated compared to the level of development of the world and the region."

Van said: “Vietnam is deeply involved in value chains and the scale of IPs with some hundreds of hectares or 1,000-1,500 ha is no longer suitable. The current model of IPs is a perfect supply chain with much bigger spaces. Some countries have IPs of about 20,000-30,000 ha each.”

“As Vietnam does not have an industrial park of 1,000 ha and a new model, it would be difficult for us to call for a wave of investment,” adding: “We must create an attractive space with a new model in the planning of IPs," she said.

The latest report by Colliers Vietnam for the first quarter said co-industrial parks are a suitable model for sustainable development and are gradually being promoted by many businesses and manufacturers in the world.

Colliers Vietnam said the model of eco-IPs will play an important role in the sustainable development strategy in general, helping to reduce resource exploitation, limit the impact on the environment while still not affecting the performance of businesses. In addition, the environment contribution will also make a positive contribution to the efforts to combat climate change in Vietnam and globally.

The report by Colliers Vietnam also said localities with IPs should regularly update the development of their parks with policies and best practices so that all could develop together, forming a synchronous system, adding that such sharing could help localities to solve many problems more effectively, make good use of the advantages of each province, create harmony in the inter-regional development process and make positive contributions to the national socio-economic development strategy.

The linkage between IPs was very important to develop logistics and commodity production chains, said the report, adding that this can help to improve the competitiveness of products, lowering production costs, and improving the sustainability of the whole industry.