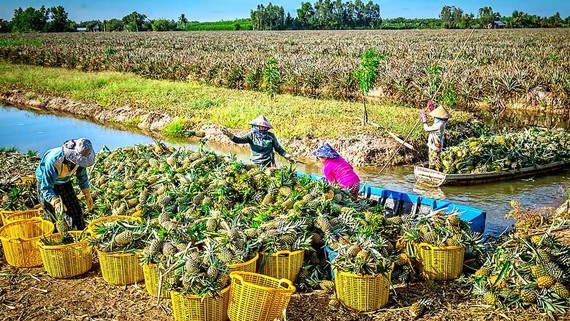 Investment in waterway transport infrastructure in Mekong Delta  is needed for region's development
When agricultural products are exported directly from Mekong Delta seaports, transportation costs will decrease, and goods will be more competitive
The Mekong Delta has long been hailed as the country's rice bowl, the basket of seafood and fruits. According to experts, the Mekong Delta has a river system up to 28,000km long, waterway transport plays a key role in the region. However, the lack of investment and weak infrastructure are current bottlenecks of the region, so the potential of the region's inland waterway transport is not fully developed. Recently, many localities in the region and seaport enterprises are very upset about the deterioration of the Quan Chanh Bo channel and Cho Gao canal.
Associate Professor Ho Thi Thu Hoa, Director of the Vietnam Logistics Research and Development Institute said that currently, ports in the Mekong Delta can be easily connected to the Philippines and Indonesia, but the proportion of the region's exports through these ports is only 10 percent-20 percent, while ports like Cai Cui port in the Mekong Delta City of Can Tho only handle about 60 percent -70 percent of the designed capacity. She pointed out the culprit is the sedimentation phenomenon at Quan Chanh Bo canal, which can only meet ships of 5,000 tons, while container ships with an average deadweight ton of 20,000 tons or more.
According to Ms. Ho Thi Thu Hoa, inland waterway transport plays a key role but lacks serious investment. Therefore, although the Mekong Delta has many advantages and great potential for developing waterway transport, it is currently just a place for gathering and collecting goods on a very limited scale.
Logistics costs in the Mekong Delta are a burden on the competitiveness of products produced in the Mekong Delta. According to the Ministry of Industry and Trade, logistics costs in the Mekong Delta account for 30 percent of product costs. According to logistics experts, the lack of linkage and synchronization in the logistics system in the Mekong Delta is a bottleneck; plus, the seaport system is still lacking, especially deep-water ports for container ships.
Mr. Vo Quoc Thang, Chairman of the Board of Directors of Dong Tam Group, analyzed that road traffic in the southwestern provinces is overloaded but local administrations have not fully invested; subsequently, goods in this area are transported to Ho Chi Minh City and major deep-water ports mostly by road resulting in high logistics costs and increased prices of commodities, thus reducing the competitiveness of domestic goods.
Besides, the connection of industrial zones - clusters, factories, ports, and inland waterways has not been smooth. Therefore, businesses often suffer high logistics costs; consequently, agricultural products for export are transported via seaports in Ho Chi Minh City. Ms. Truong Thi Kim Lien, Director of Gemadept Joint Stock Company in Can Tho moaned that up to 70 percent-75 percent of the region's agricultural products for exports must presently be transported to the port cluster in Ho Chi Minh City and Cai Mep - Thi Vai wasting a lot of time and cost, affecting the country’s competitiveness in the global market.
Mr. Vo Thanh Phong, General Director of Hau Giang Maritime Services Company Limited (VIMC Hau Giang), said that the Mekong Delta currently has seven seaports, 34 wharves, 57 inland waterway ports and nearly 4,000 wharves; accordingly, the region has many favorable conditions for logistics development because the region exports over 6 million tons of rice annually as well as provide more than 70 percent of fruits and 65 percent of seafood. Clearly, with the large scale of production and growing rapidly today, the Mekong Delta has an increasing demand for logistics services to serve production and export needs. 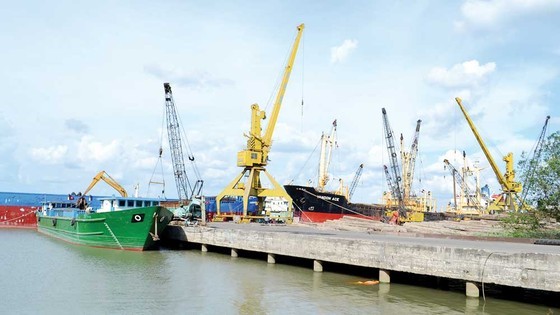 The Cai Cui port in Can Tho City
Mr. Vo Thanh Phong petitioned to pour money into completing and maintaining the standard Quan Chanh Bo canal which can receive giant ships.
Listening to businesses and experts’ opinions about two important routes in the Mekong Delta, the Ministry of Transport said that it has invested in the construction of a large shipping channel into the Hau River’s phase 2 (Quan Chanh Bo canal) with a length of 18.6km with a total investment of VND 2,596 billion in the first quarter of 2022.
Furthermore, the Ministry has spent VND 1,335.6 billion for the upgrade of the Cho Gao canal route (the second phase ) with a length of 28.6km and a width of 55m. Both projects are expected to be completed in 2023.
The Mekong Delta City of Can Tho and Hau Giang Province are two localities identified in the planning map to build logistics centers. Currently, Can Tho authority is urgently completing a project to establish a center of linkage and consumption of agricultural products in the Mekong Delta. Elsewhere, the People's Committee of Hau Giang Province has issued a plan to implement the provincial logistics and industry development program for the 2021-2025 period.
Accordingly, the locality will form three major logistics centers including Mekong logistics, Hau Giang logistics and Hau Giang Agro-export logistics center. The total budget for the implementation of the plan for the 2021-2025 period is more than VND 113,000 billion.