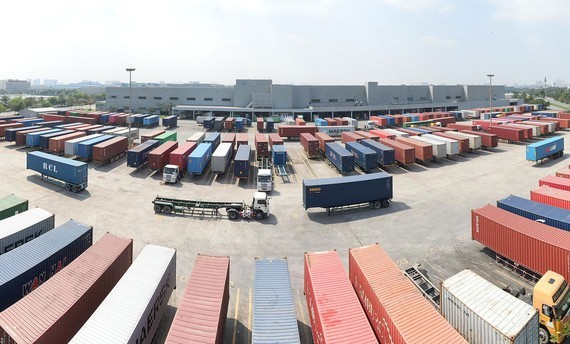 According to a report of the Ministry of Industry and Trade (MoIT), the group of commodities with a strong increase in export turnover since the beginning of the year was agriculture, forestry, and fishery, with US$2.67 billion, up 21.4 percent over the same period in 2021.

According to the representative of JETRO, more than 60 percent of Japanese enterprises want to invest in new or expand investment in Vietnam. Many of them have switched from investing in outsourcing some simple stages of products to producing finished products with high added value and the ability to export directly to third countries.

From another perspective, Mr. Nguyen Ngoc Hoa, Vice Chairman of HCMC Union of Business Association, said that the export turnover accelerated because orders had been constrained for a long time due to the Covid-19 pandemic. Currently, the pandemic situation in the country has been controlled, production has gradually stabilized, and Vietnamese enterprises can fulfill large orders, helping import partners promptly replenish supplies that are short in the global supply chain. Therefore, import partners tend to shift their orders from China to Vietnam. In the coming time, the number of orders received by domestic enterprises is expected to climb sharply, leading to a rapid increase in export turnover.

The US continues to maintain its position as the largest import market of Vietnam, with an estimated turnover of $9 billion, followed by China, the EU, South Korea, the ASEAN, and Japan.

However, besides positive signals from the export market, many domestic enterprises, especially those that only focus on developing their domestic market share, are concerned about the export-import trade balance. For example, in January 2022 alone, Vietnam had a trade deficit of $5 billion from China, up 11.7 percent; $3.8 billion from South Korea, up 28.9 percent; $1.2 billion from the ASEAN, up 69.2 percent; $600 million from Japan.

Mr. Vu Duc Giang, Chairman of the Vietnam Textile and Apparel Association, said that China has many advantages in supplying raw materials for production. Accordingly, low labor costs, a large production scale, and quick application of modern production technologies have helped China to have cheap raw materials that are enough to meet the needs of businesses globally, including Vietnam. In the textile and garment industry alone, up to 60 percent of fabric raw materials must be imported, mainly from China.

For the plastic industry, Mr. Tran Viet Anh, CEO of Nam Thai Son Import-Export Joint Stock Company, said that 60 percent of raw materials for plastic production were also imported, mainly from the Middle East and Asia. Currently, the tension and escalation of oil prices trigger the risk of pushing up plastic raw material prices. Last year, the prices of plastic raw materials had a sudden increase of 30-300 percent depending on the type, causing great difficulties for businesses. And with the establishment of a new price level in 2022, enterprises can hardly recover and speed up production.


According to many experts, the rapid growth of the trade deficit rate easily leads to consequences for the stable development of the economy. The first is the dependence on imported raw materials. Next, there are no favorable opportunities to promote investment attraction in the production of domestic raw materials. Therefore, along with solutions to strongly attract foreign investment into Vietnam, relevant authorities need to consider industries to prioritize investment attraction. Especially, it is necessary to have support policies of capital, taxes, and land rental costs to encourage enterprises to invest in raw material production to serve key export industries, reducing dependence on imported raw materials.