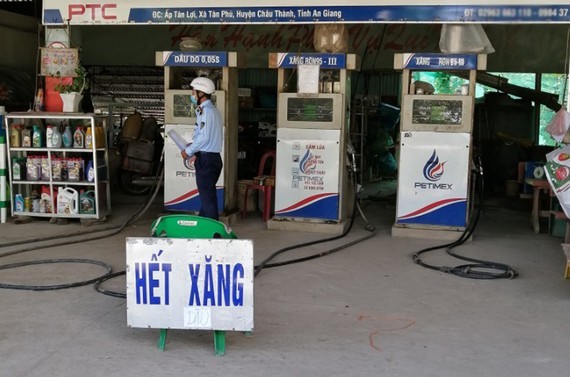 Market surveillance authority checks a gas station that put up an out-of-gas sign in Kien Giang Province. (Photo: SGGP)
Up to now, in the Mekong Delta provinces, hundreds of retail gas stations have requested to temporarily stop operating for various reasons, such as repair, upgrade, and family affairs. Some gas stations even frankly said they could not endure losses anymore.

In remote border and island districts of the Mekong Delta provinces, many people have to carry large plastic bags to buy petrol at gas stations tens of kilometers far away from their places.

Vu Thi Tuyet, living in Giong Rieng District in Kien Giang Province, said that she rode her motorbike to Rach Gia City, 30 kilometers from her house, to refill it, but the gas station only filled the tank of her motorbike and refused to sell more. To buy more gasoline, she had to find a deserted place to suck gasoline in the tank into a plastic bag and then go to another gas station to refill.

“I have to choose a State-owned gas station, such as Petrolimex, KTC (Kien Giang Trading Company), or MIPEC, in order to buy a large volume of gasoline. In my neighborhood, many families alternately send each family member to buy gasoline because gasoline is not only used for motorbikes but also water pumps and purifiers in shrimp and fish farming,” Ms. Tuyet shared.

According to the industry and trade in the Mekong Delta provinces, gasoline prices have continuously decreased from August to now. As a result, the number of gas stations asking to halt operations is constantly increasing. Some gas station owners even ask to close for five days to go to a death anniversary.

Mr. Le Khanh Hung, Director of the Department of Market Surveillance of Kien Giang Province, said that according to regulations, petroleum is a strategic commodity managed and distributed by the State. Therefore, every time a gas station asks for a temporary close, the department must send someone to check, and it is time-consuming.

Many gas stations cope with this situation by requesting to temporarily halt operations to repair the signboards or replace some floor tiles. Some gas stations are still open but put up a sign that reads 'out of gas' and 'oil available'. Currently, gas stations are selling gasoline moderately to maintain operations.

H., the owner of a gas station in Tien Giang Province, said that the discount rate was VND150 per liter in the quote on October 6, but it was only VND50 per liter on the morning of October 7. It means that after just one night, every liter of gasoline has lost VND100. Accumulated with the normal loss, the gas station will lose VND300-400 for each liter of gasoline, not to mention the costs of premises, labor, electricity, and other expenses.

Recently, dozens of petroleum enterprises in Ho Chi Minh City and Mekong Delta provinces have signed a petition with five contents to send to the Government, ministries, and agencies for consideration and settlement. They have asked for unified direction, timely intervention, and reasonable solutions to ensure the harmony of interests between the market participants, as well as to completely overcome the loss situation.

Fuel retailers must not be forced to sell gasoline at a price lower than the input price. The formula for calculating the current base price should be changed because it is not appropriate and has not included enough costs, leading to more losses when businesses sell more gasoline. When gasoline has not been able to completely follow the market mechanism, and the new formula has not been applied yet, in the immediate future, it is recommended to adopt a fixed discount rate according to the norm for retail enterprises. Authorities should consider removing the Fuel Price Stabilization Fund because of its non-objective operation, and enterprises have proposed to use tax as a regulation tool for more transparency.