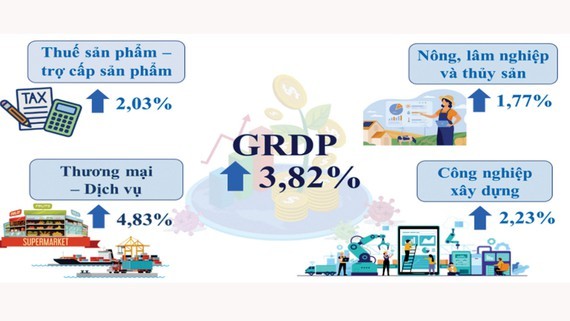 Specifically, the fields of products taxation and subsidies on products gained 2.03 percent; trade and services surged 4.83 percent; agriculture, forestry and fisheries increased 1.77 percent; construction-industry raised 2.23 percent.
In June of 2022, the revenue of trade and services reached VND99.657 billion (US$4.3 billion), surging 41.1 percent and the field gained VND556,488 billion (US$24 billion) in the first six months of the year, augmenting 6.2 percent over the same period last year.
The positive results showed good recovery of the city economy, especially in the fields of trade and services.

As for the domestic travelers, the city welcomed over two million visitors in June and over 11 million travelers in the first half of the year, increasing 43.1 percent over the same period last year, reaching 61.6 percent of the 2022 plan.

The total revenue from the tourism industry from the beginning of the year up to now has been estimated to reach VND49,681 billion (US$2.1 billion), increasing 29.9 percent over the same period last year and gaining 73.5 percent over the 2022 plan.