This is a plan in the national census carried out by the General Statistics Office of Vietnam to evaluate the growth in quantity, size, and labor of economic establishments, thereby, using it as a basis to set out socio-economic development strategies in the coming time, meeting the management requirements of the Party, State, ministries, industries, and localities.

HCMC currently has more than 300,000 enterprises, accounting for one-third of the total number of enterprises across the country. To carry out this large-scale survey, from May last year, the central government and the city have conducted several preparations, including building plans, designing questionnaires, developing information processing software and preparing information infrastructure, recruiting and training staff for the census, and reviewing census units.

The 2021 economic census will take place nationwide, divided into two phases. Of which, Phase 1, starting from March to mid-May this year, will collect information on production and business establishments of the business sector and administrative, non-business, and association establishments. Phase 2 will be implemented from May 15 to the end of July 30 this year. 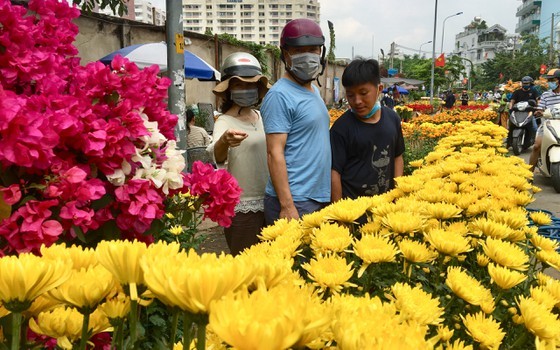 Consumers buy ornamental flowers for the celebration of Lunar New Year in Go Vap District. (Photo: SGGP)
According to Mr. Huynh Van Hung, the new point of this economic census is the thorough application of information technology in all stages of the census to save time for enterprises when making declarations on the web platform, and the information of enterprises will be kept confidential. Besides, the city will strengthen propaganda for enterprises to understand their responsibilities in this census.

Enterprises and administrative, non-business, and association establishments will declare directly at http://tongdieutrakinhte2021.gso.gov.vn from March 1 to April 30, 2021. As for individual and religious units, census takers will directly interview them by computer-assisted personal interviewing (CAPI) on smart electronic devices.