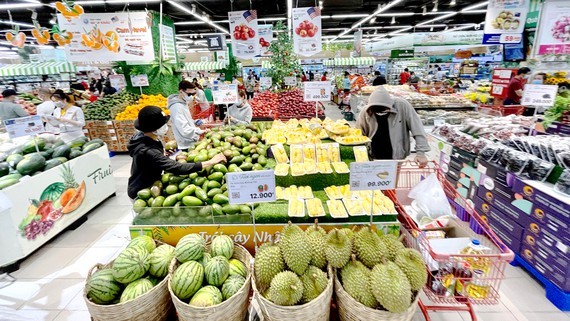 Buyers at a supermarket (Photo: SGGP)
Different from the boring scene when the Covid-19 epidemic raged, in recent months, especially on the big holiday of April 30 and May Day, Ho Chi Minh City has witnessed a bustling shopping scene again at commercial centers and supermarkets.
Large shopping centers such as Aeon, BigC, Emart, MM Mega, or supermarket systems Saigon Co.op, Satra have seen crowds of customers who were waiting in line to buy commodities. A representative of Aeon Vietnam said that during the past holiday, business locations across the country have recorded positive growth.
For example, at Aeon General Department Store and supermarket - Tan Phu, the number of visitors and purchasing power increased by 30 percent compared to weekends in the first few months of the year. Ms. Huynh Thi Kim Thanh, Director of General Department Store and supermarket Aeon Tan Phu said that compared to the holiday of April 30, 2021, the number of visitors to Aeon - Tan Phu this year recorded an increase of about 30 percent, and the purchasing power increased by about 50 percent.
Previously, it was forecast that the number of customers would increase sharply, so Aeon Vietnam had a plan to increase the output of goods and increase human resources to ensure activities to serve customers for shopping and entertainment during the holiday.
Similarly, BigC and MM Mega systems said that up to now, the number of customers coming to shop, especially retail customers, has increased sharply. According to a representative of MM Mega, the present purchasing power is now equal to, or even higher at times, than before the Covid-19 epidemic. Noticeably, in these systems, there has been a growing trend of non-cash payments, card payment transactions, and e-wallets amongst customers.
Although the number of visitors increased compared to the same period last year, the prices of items in commercial centers and supermarkets are still stable so far. Moreover, more promotion programs have been launched such as buying one get one free or buying 2 pay 1.
Furthermore, many items including foodstuff, household appliances, and fashion are up to 50 percent off to stimulate demand this summer. 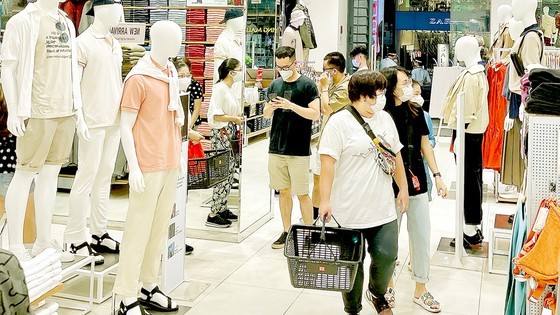 Many customers are seen in commercial centers (Photo: SGGP)
However, a BigC representative also said that if a supplier requests a price increase, the supermarket will find out the market price and renegotiate it with the supplier. The renegotiation time will last long. Additionally, most of the commercial centers and supermarket systems are currently included in the price stabilization program of Ho Chi Minh City, so they will not be able to increase soon.
The latest report of the Ministry of Industry and Trade has shown that the total retail sales of goods and service revenue in the past four months posted a remarkable growth compared to the same period last year; plus, goods are abundant, purchasing power tends to increase.
Specifically, the total retail sales of goods and services in April reached VND455.5 trillion, up 3.1 percent over the previous month and 12.1 percent over the same period last year.
Generally in the first four months of this year, the total retail sales of goods and services reached VND1,777.4 trillion, up 6.5 percent over the same period last year. Retail sales of goods in the first 4 months of the year increased by 7.6 percent over the same period last year, and food and foodstuffs alone increased by 13.2 percent due to rising commodity prices.
However, the group of garments and household appliances, tools, and equipment in the same period decreased by 3.5 percent and 4.6 percent respectively over the same period, because people's income is still low because of difficulties after the prolonged Covid-19 epidemic.
Particularly, for an extended vacation on the occasion of the national holidays, along with many domestic tourism stimulus programs implemented, the demand for tourism and services of the people has increased significantly.
According to the Ministry of Industry and Trade’s assessment, the market of essential commodities does not have large fluctuations in supply and demand, but due to the influence of the price increase in the world market, the prices of some domestic products such as fertilizers, animal feed, and raw materials, construction steel increased compared to the previous month.
The government will closely control the prices of fuel and energy commodities such as petrol and oil following the development of the global prices, but the fluctuation range to stabilize the domestic market will be restrained. Gas prices in April were also adjusted up in parallel with the world prices.
According to experts in the retail industry, the increasing number of customers returning to shop in recent months is the driving force leading the market to return to normal.
Aeon Vietnam General Director Furusawa Yasuyuki optimistically commented that with GDP growth targeted by the Government at around 6 percent-6.5 percent this year, the pre-Covid-19 growth rate will hopefully be regained. With the current situation, analysts say, Vietnam has become a potential retail market for foreign retail firms attracting many investors who will pour money in the coming time.