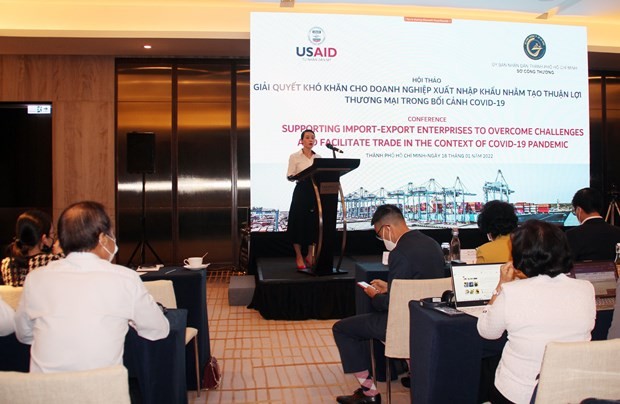 A view of the conference (Photo: VNA)

The department said the value of exports to major markets like China, the US, Japan and the European Union (EU) dropped in 2021, adding that although the southern metropolis is performing well in pandemic prevention and control, production and export-import activities have yet to be fully recovered.
It reported a range of obstacles to exports regarding workforce, warehouses, high maritime transportation cost and a shortage of containers and ships, plus tightened pandemic prevention and control measures rolled out in key markets.
Le Huynh Minh Tu, deputy director of the department, said his agency will coordinate with relevant sectors and associations in the city in trade promotion and facilitation amid Covid-19.
Under its export development project by 2025 with a vision towards 2030, HCMC targets an average annual export growth of 9.5 percent in 2021-2025, and 9 percent in 2026-2030. Meanwhile, total export turnover is expected to hit US$70 billion by 2025, and $108 billion by 2030.
Ann Marie Yastishock, USAID Vietnam Director, said the US is one of the biggest markets for exporters in HCM City, noting that among the six cities and provinces selected for the 2018-2023 USAID Trade Facilitation Program, HCM City is considered a strategic partner in trade facilitation. The $21.7 million program promotes reform, standardisation, harmonisation and simplification of administrative procedures related to foreign trade to implement the World Trade Organisation (WTO)’s Trade Facilitation Agreement and relevant policies adopted by the Government.
Dang Thai Thien, deputy head of the Supervision and Management Division at the HCMC Customs Department, stressed the significance of institutional reform, digital transformation and the national one-stop shop portal to boost the city’s export.
The business community voiced their hope to receive support in renewing technology and promoting trade abroad, as well as in accessing free trade agreements to which Vietnam is a member.