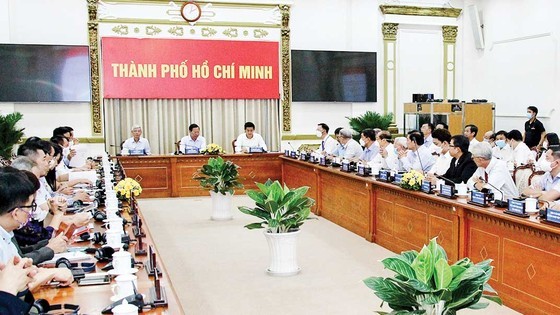 Mr. Phan Van Mai said that, after 30 years of construction, HCMC had had 17 EPZs and IPs with a total area of 4,000 hectares. Although their scale remains modest, EPZs and IPs operate fairly efficiently, contributing a large proportion to industry and export. However, to comprehensively reevaluate the pros and cons of this model, HCMC has coordinated with relevant agencies to develop the Project on Orientation for the Development of HCMC-based EPZs and IPs in the 2025-2030 period and a vision to 2040, with the desire to listen to the solutions to orient and restructure following the actual situation and the trend of industrialization and modernization.

Reporting on the operation of EPZs and IPs, Mr. Hua Quoc Hung, Head of the HCMC Export Processing and Industrial Zones Authority (HEPZA), said that EPZs and IPs that were established in the early 90s, such as Tan Thuan, Linh Trung 1, Linh Trung 2, Binh Chieu, Tan Thoi Hiep, Vinh Loc, Tan Binh, Tan Tao, Northwest Cu Chi, and Hiep Phuoc Phase 1, had operated for more than half of their durations. Some EPZs-IPs have also shown limitations, which is that sustainable development in terms of economy, society, and environment has not been ensured. Some EPZs-IPs and industries remain highly labor intensive, and the average attraction value per hectare of land is still low. It is also the reason why the People's Committee of HCMC assigned Hepza to complete the project soon to have a suitable and timely adjustment direction.

“According to research, enterprises in EPZs and IZs have operated for half of the project cycle. Now, they are hesitant to expand production scale and upgrade machinery and equipment due to the short remaining time of just over 20 years. At the same time, the HEPZA and EPZ-IP infrastructure companies also face difficulties in attracting investment in new projects because the remaining time of the project is too short, so it is difficult for them to recover capital for production investment projects," said Mr. Hua Quoc Hung.

Facing this situation, enterprises want the city to have a plan soon to orient the development of existing EPZs and IPs, roadmaps, and policies for EPZ-IP conversion so that enterprises with high technology feel assured of long-term investment, and enterprises with old and outdated technology will have plans to upgrade technology, as well as continue to attract new projects in accordance with the city's planning and orientation into EPZs and IPs.

Planning must have a focal point

Representatives of most associations and enterprises attending the seminar expressed their wish that the People's Committee of HCMC would keep the EPZs and IPs, especially Tan Thuan EPZ when the remaining time is very short. 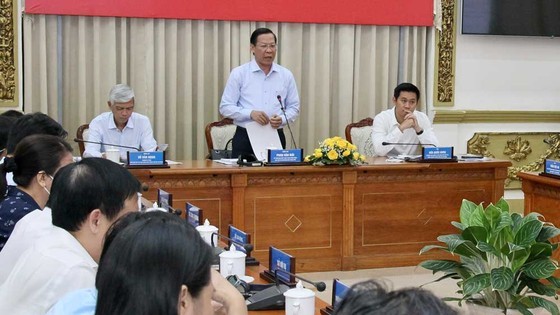 Mr. Phan Van Mai speaks at the seminar. (Photo: SGGP)
Many experts said that the planning of EPZs and IPs must be synchronized on the basis of inheriting and reconsidering what is good and right. Especially, the planning must have clear deadlines and careful consideration of arising problems which affect people's lives. “Tan Thuan EPZ has completed its mission, but it is not good to stay as it is now. The city should improve the efficiency of investment projects and expand the area, such as associating it with the Southern Economic Zone of the city. To promote the development of EPZs and IPs, the upcoming planning must have a focal point, treat investors' difficulties as their own, and take good care of investors. Especially, to overcome current difficulties, it is necessary to apply the previous model, with an on-spot one-stop-shop mechanism and financial autonomy,” suggested Mr. Nguyen Chon Trung, former Head of HEPZA.

The representative of Hepzone - Linh Trung Company suggested that besides maintaining the existing EPZs and IPs to build confidence for investors, enterprises need to change technology following trends and avoid labor-intensive industries. In addition, it is necessary to expand and be flexible for industries when they meet the criteria instead of gathering industry groups in each zone as currently so that enterprises do not have to move to other areas. At the same time, it is essential to select investors with strong financial capacity and international investment experience for EPZs and IPs. Moreover, the project should pay attention to ensuring that the infrastructure system, such as electricity, water, and gas supply and IT, is stable for the factories to operate without interruption; creating favorable conditions for traffic routes from the EPZs-IPs to the airport and the reciprocal capacity of the airport.

The HEPZA’s representative said that he had proposed to the Government and the Ministry of Planning and Investment to continue to expand the old and new EPZs and IPs. Regarding this matter, Mr. Vo Van Hoan affirmed that the city does not have the policy to abandon or delete any EPZs and IPs but orients the appropriate transformation and, at the same time, supplements orientations for new EPZs and IPs.

According to the Prime Minister's planning, HCMC has 23 concentrated EPZs and IPs with a total area of 5,921 hectares. Up to now, 19 EPZs and IPs have been established, of which 17 EPZs have been put into operation, with an occupancy rate of about 80 percent. Since the implementation, the city's EPZs and IPs have attracted 1,665 investment projects, with a total registered investment capital of US$12.5 billion. The annual export turnover of EPZs and IPs is about $8 billion, accounting for about 21 percent of the city's export turnover, excluding crude oil. The annual budget revenue of enterprises in EPZs and IPs is nearly VND50 trillion.