Speaking at the meeting, Mr. Nguyen Thien Nhan said that the SHTP currently attracts about US$7.5 billion of investment capital. Of which, foreign enterprises accounted for 31 percent but held 74 percent of investment capital. Besides, the number of employees in SHTP is 42,000 people, accounting for less than 1 percent of the total number of employees in the city, but they contribute 37 percent of the export value.
Therefore, it shows that if HCMC attracts investments into the SHTP better, this place will contribute to the economic development of the city even more. Welcoming the development goals of the SHTP in the coming time, Mr. Nguyen Thien Nhan also noted that the orientation should be put in relation to the establishment and development of Thu Duc City.
According to him, SHTP is the nucleus of the economic development of HCMC in the coming time, associated with Thu Duc City. Therefore, the leaders of HCMC need to grasp the situation firmly, share the success, and promptly remove the obstacles for the SHTP. In response to the proposal to have a specific inter-agency one-stop-shop mechanism in handling procedures for enterprises in the SHTP, Mr. Nguyen Thien Nhan noted that the SHTP Management Board needs to develop a project, clearly stating its authority.
In the implementation of Resolution No.54 of the National Assembly, the People's Committee of HCMC and the Chairman of the municipal People's Committee have authorized more than 80 jobs to departments, the People's Committee of the districts, the heads of departments, chairmen of the People's Committees of districts, he added.
Hence, he suggested building an authorization mechanism for the SHTP Management Board. If the law does not allow it, a group which can be called a high-tech group led by the Vice Chairman of the City People's Committee will be established and immediately make decisions on issues related to the operation and development of the SHTP. 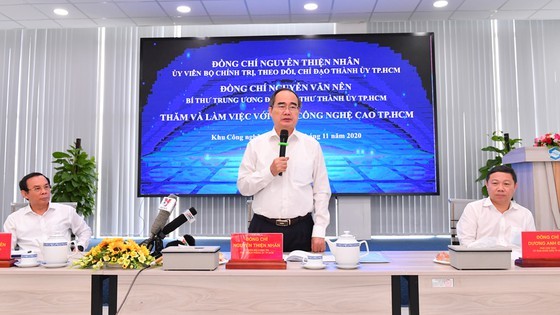 Mr. Nguyen Thien Nhan speaks at the meeting. (Photo: SGGP)
Mr. Nguyen Thien Nhan also agreed with the solutions to promoting the commercialization of high-tech products in research activities to deploy the association model among investors, scientists, and the State. Thereby, it aims to strengthen the connection between the SHTP and the National University of Ho Chi Minh City, contributing to realizing the goal of developing the Highly-Interactive Innovation Urban Area in the East of the city.
Earlier, Mr. Nguyen Anh Thi, Head of the SHTP Management Board, reported to the delegation that investment capital in SHTP used to reach its peak twice: in 2006 when Intel invested in it, and in 2014 when Samsung made the investment. It is expected that in 2021, investment attraction into SHTP will continue to hit a new high from the expansion activities of new investment projects. However, to facilitate the development of SHTP, Mr. Nguyen Anh Thi proposed the implementation of the specific inter-agency one-stop-shop mechanism in coordination with related units to shorten the time to process procedures for enterprises and the removal of problems in planning and public investment of the Science and Technology Park. Along with that, the policy to support investment for phase two of the Intel Vietnam project should be approved soon.

At the meeting, Mr. Nguyen Van Nen, Secretary of the Party Committee of HCMC, highly appreciated the decision to establish and develop the SHTP, which has achieved many impressive results. The results are shown by the fact that SHTP has attracted 160 investment projects, including 110 domestic projects with a total capital of more than VND44.56 trillion and 50 foreign projects with a total investment capital of nearly $5.7 billion. SHTP has contributed to the development of HCMC. Besides, the intangible value that SHTP brings about is the spread and inspiration for other provinces, as well as the young generation to research and develop science and technology. This has great significance in stimulating the innovation of HCMC. 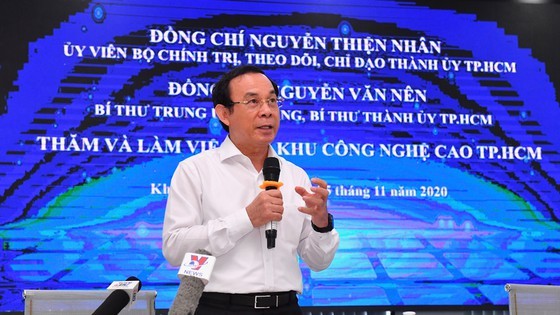 Mr. Nguyen Van Nen, Secretary of the Party Committee of Ho Chi Minh City, emphasizes the importance of investment attraction policies. (Photo: SGGP)
Understanding thoroughly the great lessons that have brought the success of SHTP, Mr. Nguyen Van Nen emphasized the importance of investment attraction policy, along with flexibility in leadership, direction, and administration of the city’s leaders. Thereby, these factors have created an attractiveness, luring investors to participate in the SHTP. He also concurred with the development orientation of SHTP in the coming time, which focuses on developing human resources, infrastructure, and supporting industries, as well as removing obstacles in mechanisms and policy for investors.

The Secretary of the Party Committee of HCMC noted that related units should pay attention to the solution of connecting the State, investors, and scientists, especially taking care of existing enterprises that have a long term relation with HCMC.

‘If you want to promote and invite new investors, first of all, you need to treat enterprises that have already invested –the ones who are living with you,’ Mr. Nguyen Van Nen emphasized. And he affirmed that when there is a good support policy for existing enterprises, it will be evidence more valuable than thousands of words. 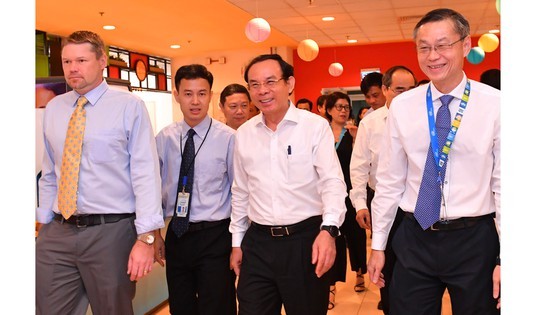 Mr. Nguyen Van Nen and the delegation of city leaders visit Intel Vietnam. (Photo: SGGP)
Along with that, it is essential to retain high-quality human resources for them to stay for a long time and make contributions. At the same time, it is necessary to continue to promote the convenient location of SHTP for it to deserve the choice and create the attractiveness of Ho Chi Minh City. In response to the recommendations of the SHTP Management Board, Mr. Nguyen Van Nen requested related agencies to promptly remove difficulties and obstacles to contribute to the development.

In the first ten months of this year, the production value of technology products in SHTP is estimated at more than $16.2 billion, up 19.82 percent over the same period. In which, export value exceeded $15.4 billion, up nearly 24 percent, and import value surpassed $14 billion, up nearly 27 percent. Up to now, the production value of high-tech products of SHTP is estimated at roughly $81 billion. Of which, exports were nearly $77 billion, and imports more than $70 billion.

Currently, the SHTP Management Board is focusing on carrying out the remaining projects and striving to basically complete the infrastructure of the entire 913 hectares of the SHTP as planned by the end of this year.

Over the past months, enterprises in SHTP have continued to both develop the economy, prevent the pandemic, and actively rearrange their employees, ensuring that their employees are not affected too much by the Covid-19 pandemic. Enterprises in the SHTP provide jobs for 42,246 employees, a decrease of 3,426 employees compared to the first three months of this year.

According to the plan, the People's Committee of HCMC added nearly VND6 billion to the budget estimate for the SHTP Management Board to support employees who were suspended jobs or lost their jobs due to the impacts of the Covid-19 pandemic. However, enterprises in the SHTP have actively organized, arranged, and ensured that employees are not affected too much by the epidemic. Enterprises have reported that no cases are affected and should be supported following regulations. Therefore, the SHTP Management Board will reimburse the financial support of the city.