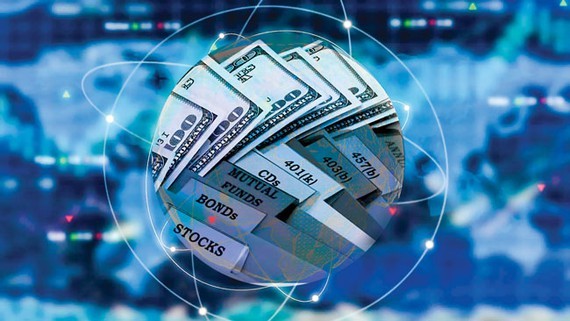 Illustrative photo
This is also a good opportune time for Vietnam, where it can exploit and take maximum advantage of its success in controlling and containing the pandemic. Vietnam has also done well in stabilizing its economy and continuing to offer the country as a great base for international investments.

The State policy laws allow the Government to take international loans, including international bonds, to make up for overspending. The Government may likely issue bonds in international markets in order to meet the needs for development and restructuring of public debts at reasonable costs and low risks, therefore contributing to adequate security of national finances in the 2021 to 2030 period.

The Government will have favorable opportunities to issue more international bonds based on its past successful experiences in issuing Government Bonds (GBs) in the international capital markets, and as a consequence stabilize the domestic macroeconomic conditions in the country.

In 2020, Vietnam's economy grew by 2.91%, which was the lowest in the last decade. However, Vietnam can remain proud to be among countries with the highest economic growth rate. The impressive success in stemming the pandemic and facilitating positive economic recovery and growth shows the enormous concerted effort and unity of the country’s politicians, people and corporate community.

Over the 2016 to 2020 period, the key macroeconomic elements continued to remain stable, and the economic structure has hence moved forward in a very positive way, while inflation has been under control at the rate planned by the Government. Vietnam has continued to enter new generation trade agreements such as CPTPP, EVFTA and RCEP, creating new products and market opportunities for Vietnamese businesses, which have been one of the main drivers of economic growth.

In any economic cycle, the first phase after a deep depression is the period when the Government or public investment capital plays a key role in restructuring and promoting economic growth. The Government investments in infrastructure, production and supply of goods and services that are in the private sector fail to provide or are unable to operate effectively. Therefore, the chance to issue GBs in the international markets is clearly an option.

While interest rates are low and liquidity is abundant, demand is greater for restructuring the investment portfolio for seeking financial assets that ensure higher interests. Vietnam issues GBs with long terms of up to ten years with higher interests than similar products, which is in line with market trends and enables to take loans both at reasonable interest rates and with long terms, meeting the needs of domestic public investment projects. With liquidity in abundance, or even flooding as described by several economists, the needs for investment in highly profitable products in emerging countries could meet the expectations of many domestic socio-economic development projects.

Over the last few years, the exchange rate of USD against the VND has been relatively stable due to abundant foreign currency. With such advantages, Vietnam is expected to be an appealing destination for foreign investors, attract more foreign money, lower risks of exchange rates, and avoid increased debts.

Since 2005, Vietnam has successfully issued GBs three times. Affirming the Government's international integration policy by getting actively involved in international financial markets. The successful issue of GBs indicates the Government's macroeconomic management has been highly valued by international investors. The issue of GBs created a benchmark for pricing bonds for the next issue. The GBs issued in 2014 offered lower interest rates than ones issued in two previous times, and bond swapping reduced the obligation to pay interests by about US$ 5 mn in each interest payment.

The recent issue of GBs has satisfactorily met the need for restructuring the GBs previously issued by the Government. Additionally, the new issue of GBs, together with former bond swapping, shows the Government's flexibility in public debt management, and successful bond issuing transactions have now reduced the Government's obligations to pay foreign debts.

In late 2020, with GDP reaching US$ 343.6 bn, the capital need for socio-economic development in the next period will be substantial. Total dependence on raising funds domestically would not help and would worsen by excessive pressure on the domestic financial market, which badly needs support for a speedy recovery.

The 2016 to 2020 period witnessed the Government's success in controlling the situations in terms of overspending, public debts, government debts and foreign debts. The state budget overspending in the 2016 to 2020 period reached an average of 3.45% GDP, ensuring the goal of not exceeding 3.9% GDP. The public debt in late 2020 increased to 55.3% GDP, the Government debt was 49.1% GDP, and foreign debts made up 47.3% GDP, which were all lower than the ceiling set by the National Assembly for the financial plan in the five-year period of 2016 to 2020.

Immense amounts are also needed for industrialization, modernization and restructuring of the economy for a strong national industry with high technology and considerably increased values. The issue of GBs in international markets will not only allow businesses to raise funds in the domestic market, but also provide references for such businesses to raise funds in international markets. This will diversify foreign capital sources for investments in social development, apart from other capital sources.